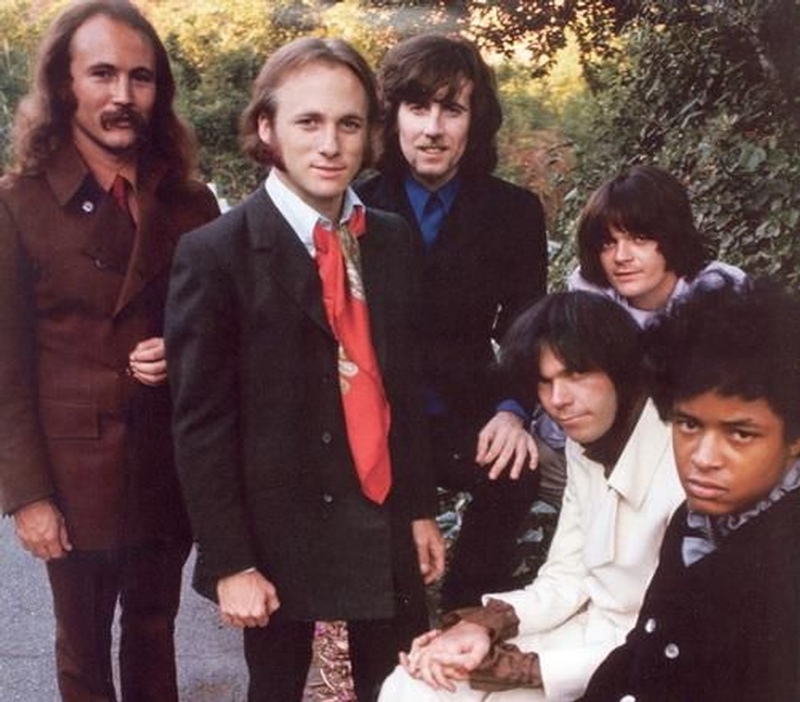 Originating from the "super group" Crosby, Stills & Nash, this "super duper group" came to be through Steven Stills' quest to form a well rounded touring band to support the tremendous success of Crosby, Stills & Nash's 1969 debut LP. Other than the presence of prior Brain Train and Clear Light member Dallas Taylor (drums), Stills had handled the majority of CSN's studio instrumentation and was now in search of a solid keyboard player to fill in some gaps. Stills had initially approached Steve Winwood of Traffic to handle the ivories, but he gracefully declined, so Atlantic Records founder Ahmet Ertegun suggested bringing ex-Buffalo Springfield member Neil Young on board. Although initial reservations were held by Stills and Nash (Stills' due to a "shakey" past relationship in Buffalo Springfield and Nash's from simply not knowing him outside of his work), the trio eventually became a quartet after several meetings; the terms of a formal agreement allowing Young to continue a parallel career with his backup band Crazy Horse. Greg Reeves (bass) was also officially brought in to complete the ensemble.

Touring began during the late summer of 1969, their second gig a baptism by fire at the Woodstock festival on August 17. The awesome performance of 'Sea Of Madness' at Woodstock is true validation of how good they really were coming out of the shoots as a complete band. While on tour, they also continued work on a long awaited follow up LP (Déjà Vu) that was released in the spring of 1970. The highly individualized songs that resulted were by design, allowing each member to complete their own artistic vision, a luxury not afforded in their previous bands. The result was a more polished and better produced sound than on the Crosby, Stills & Nash debut LP. Stills leads off the album with the highly energetic 'Carry On' while Nash chips in two hit singles with 'Teach Your Children' (Jerry Garcia of the Grateful Dead plays pedal steel guitar on this classic) and the Beatles-tinged 'Our House'. Young varies his mood between the reflective 'Helpless' and the sing-a-long 'Everybody I Love You', and Crosby's atmospheric title track is one of his most daring compositions, setting a serious tone for the album. Young's non-LP single 'Ohio' illustrates the group's keen political timing, depicting the recent Kent State shootings.

The ensuing "Carry On Tour" made them the most popular live band in the world and, culminated with the success of their studio work, the torch bearers for the "Woodstock Nation" U.S. counterculture. Much of CSNY's appeal can be attributed to their ability to play large venues while maintaining an intimacy with their audience. This is felt on their next release, the live double LP Four Way Street, where the record is split between electric group sets and solo (or in the case of Crosby & Nash, duo) acoustic sets. The album especially captures their tight rapport with the audience on the acoustic tracks, which features solo material from recent releases.

After two more years of solo and duo releases, the four members reconvened for a new studio LP in 1974. Although several tracks were recorded, the album was abandoned because the individual members could no longer get along in the studio. A tour followed, but the individuals returned to recording as soloists upon its completion. Neil Young continued his solo success throughout the 1970s, which included an album with Stills billed as the Stills-Young Band. The quartet continued to successfully tour and release studio LPs into the 2010s.

Find The Cost Of Freedom