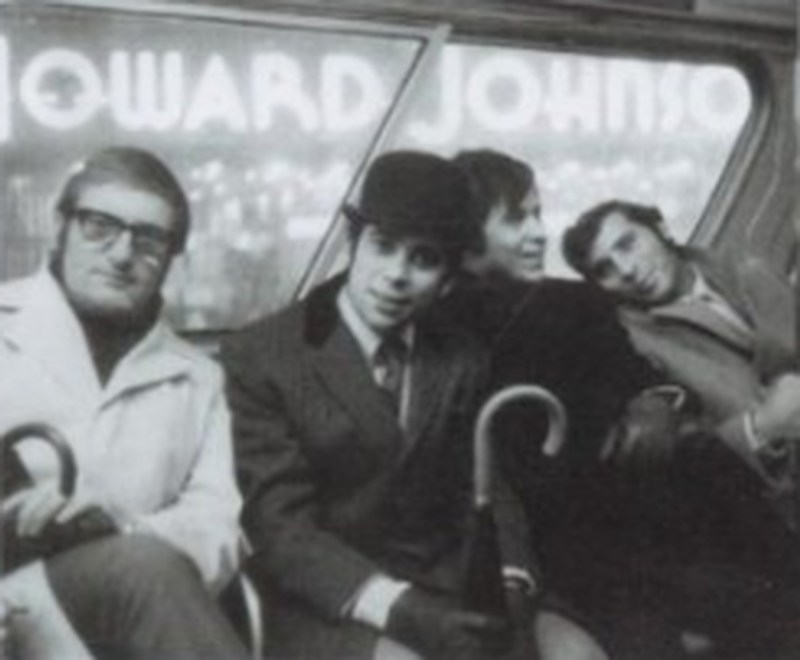 The Tokens were more of a straight forward pop ensemble not hardly best known for their psychedelic output, but like many groups that traversed through the hazy late 60s, they did dabble in the genre somewhat successfully. First known as the Linc-Tones, this New York City band formed way back in 1955 at Brooklyn's Abraham Lincoln High School as a doo-wop style vocal group. Original members included Hank Medress (vocals), Neil Sedaka (vocals), Cynthia Zolotin (vocals) and Eddie Rabkin (vocals). In 1956, Rabkin was replaced by Jay Siegel (lead vocals) and the group subsequently issued their first single ('I Love My Baby' b/w 'While I Dream') as the Tokens on the Melba label in the summer of that year, with both tracks co-written by Sedaka. 1957 saw both Sedaka and Zolotin exit the band, leaving Siegel and Medress to recruit Warren Schwartz (vocals) and Fred Kalkstein (vocals), and then release two singles on the Roulette label as Darrell & The Oxfords. The group changed their moniker back to the Tokens in 1960 after Schwartz and Kalkstein left and were replaced by 13 year old multi-instrumentalist and first tenor Mitch Margo (vocals, guitar, keyboards) and his baritone brother Phil Margo (vocals, percussion). It was this lineup that remained stong and steady for over 15 years, issuing a slew of hits throughout their successful career.

In 1961, the band scored big for the first time after issuing the single 'Tonight I Fell In Love', which was penned by Phil Margo and Medress, and peaked at #15 on the Billboard Hot 100. This success prompted an appearance on the nationally televised music and dance show American Bandstand, which was extremely well received by all who caught their act. This in turn got them signed to the national RCA label, culminating in the #1 smash hit 'The Lion Sleeps Tonight' in the fall of that year. 1963 saw the Tokens also begin serving as record producers for other artists by creating their own production company named Bright Tunes and also the record label B.T. Puppy. They issued their first single ('Swing') on their label in the spring of 1964, which only bubbled under the charts reaching #105. Ironically, other groups on the label fared just as well or sometimes better than the Tokens, including the Happenings which scored a #3 smash in the summer of 1966 with 'See You In September'.

Upon being heavily influenced by The Beatles, and the Beach Boys' Pet Sounds LP, the group began experimenting with psychedelia a bit in early 1967 with the release of their original single 'Green Plant', which is quite good. Although the record didn't chart at the time, it did end up getting covered very well by other artists including Amanda Ambrose, Majic Ship and the U.K. band Cherry Smash, all versions of which are featured here on TWOS. In the spring of '67, the band scored a contract with Warner Bros. to better distribute their vinyl, but continued producing their music at Bright Tunes. It was around this time that they wrote and produced the outstanding 'Wounded', which was recorded and released as a single by the Cookies.

The spring of 1968 saw the group issue another psychedelic single titled 'Mister Snail' under the alias Margo, Margo, Medress & Siegel, which is wonderfully weird and an amazing hybrid of both The Beatles and Beach Boys late 60s sounds. At around this time, they had also began work on a psychedelic concept album, which they had titled Intercourse. Unfortunately, Warner Bros. didn't receive well the fact that they were straying further away from their more straight forward pop sound nor the rather risque title of the LP, so they opted out of it's distribution, delaying its pressing until 1969 when B.T. Puppy finally issued it as a 200 copy only limited release. Highlights on the record include 'Waiting For Something' and 'You Loser-You Fool'.

As the late 60s came to a close, the band broke ties with Warner Bros. and signed to the Buddah label, issuing the poppy 'She Lets Her Hair Down (Early In The Morning)' in late '69, which was their first song to reach the Billboard Hot 100 at #61 since the 1967 minor hit 'It's A Happening World'. 1970 saw them score another minor hit with a cover of the Beach Boys' 'Don't Worry Baby', but that would prove to be the end of their successful run as the Tokens. In 1973, Medress finally decided to call it quits, but the remaining three members forged on as Cross Country, issuing a cover of 'In The Midnight Hour', which became a solid hit peaking at #30 on the U.S. charts. The foursome did end up reuniting in 1975 and most notably in 1978, recorded a song for ABC's popular Schoolhouse Rock Saturday morning cartoon series titled 'A Victim of Gravity'. To this day, Siegel continues to solidly perform the Token's hits as Jay Siegel's Tokens.