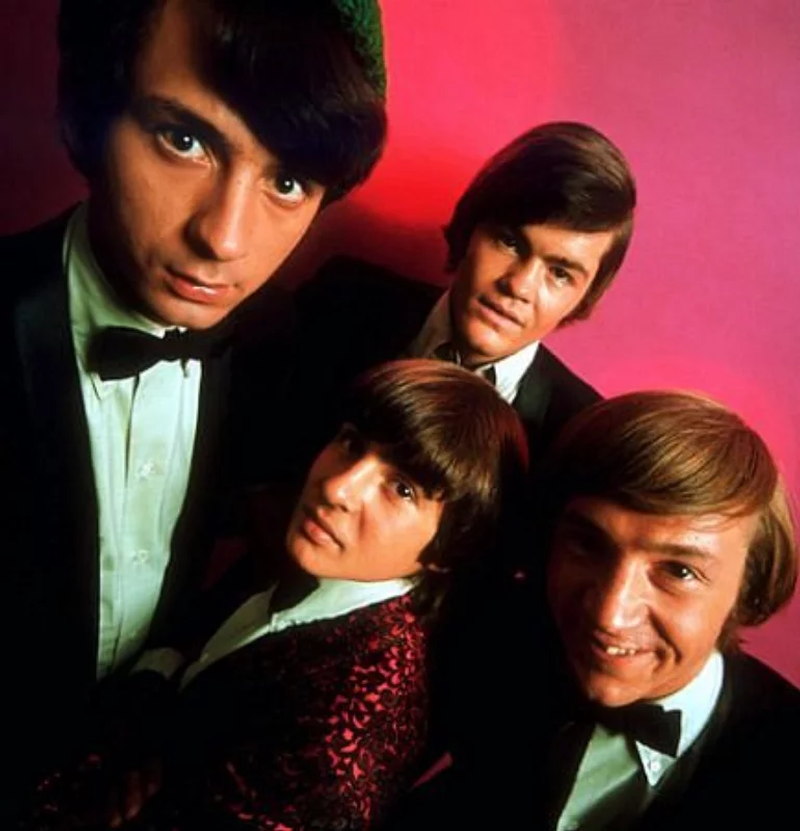 Although they were initially an artificially manufactured band, created to star in a TV show about a successful pop group that closely resembled The Beatles, the Monkees proved to be much more than that, achieving three number one singles, releasing nine LPs and for a short time, even rivaling The Beatles in popularity. The Monkees name was even purposely spelled wrong to duplicate the play on words misspelling of The Beatles.

The Beatles' films A Hard Day's Night and Help! were the inspiration for producers Bob Rafelson and Bert Schneider (collectively known as "Raybert") to begin creating the TV sitcom The Monkees in 1965. To find the fabbest foursome, Raybert held auditions in the Los Angeles area. Among the 400+ rejected applicants were Danny Hutton (later of Three Dog Night), Stephen Stills (later of Buffalo Springfield), songwriters Harry Nillsson and Paul Williams, Bryan McLean (later of Love) and Paul Petersen of The Donna Reed Show. The often reported tryout of convicted mass murderer Charles Manson is false due to the fact he was incarcerated from 1961 into 1967.

Of the four chosen, two were musicians with no prior acting experience and the other two were former actors that had dabbled in the music business with little to no success. Englishman Davy Jones (vocals, percussion) had previously acted in the stage version of Oliver! and after coming to L.A., was being groomed as a teen idol. Former child actor Mickey Dolenz (vocals, drums, guitar) had starred in the 1950s TV show Circus Boy and was playing guitar in a band called the Missing Links. Michael Nesmith (guitar, steel pedal guitar, organ, vocals) was a former folk musician who had impressed Raybert with his wit and composing abilities, while Peter Tork (bass, guitar, keyboards, banjo, vocals), also a former folkie, had been recommended by Stephen Stills after he had failed to make the cut. It's interesting to note that Tork had previously played with Stills in a group called the Buffalo Fish.

After the pilot was accepted by NBC, the newly formed quartet began filming and recording at a furious pace to meet the demand of a 25 episode season. Tommy Boyce and Bobby Hart were hired as songwriters to support the show's music and quickly made their mark with '(Theme From) The Monkees', 'Last Train To Clarksville' and 'I Wanna Be Free'. Raybert realized that Boyce & Hart, although doing a great job, could simply not write enough material to meet the demand of the show's rigorous schedule and quickly hired publisher Don Kirshner as Musical Director.

While the Monkees were busy shooting the TV program 14 hours a day, they were also required to add vocals to pre-produced songs for the show's soundtrack. Boyce & Hart's 'Last Train To Clarksville' was released as the Monkees' first single in August of 1966, a few weeks before the show's premiere. Slick production and a catchy hook (along with heavy advertising promotion) helped the single shoot up the charts and make the show an instant hit. The accompanying self-titled debut LP also sold like wildfire and showed off the song writing talent and production skills of Boyce & Hart. Other standout tracks on the album include Goffin's and King's 'Take A Giant Step' and David Gates' 'Saturday's Child'. Nesmith chipped in two songs, 'Papa Gene's Blues' and the outstanding 'Sweet Young Thing', showing his country leanings that would consume his later work. From the very start, Nesmith was pushing for more original compositions by the band, even insisting that Tork play on his songs. Nesmith's wishes were granted as he foresaw the Monkees actually working together as a recording band. Their second single however, was culled from Kirshner's vast stable of songwriters and 'I'm A Believer', written by Neil Diamond, quickly became the Monkees' second chart-topper and broke them worldwide.

The success of the show took everyone by surprise, hurling the Monkees and Raybert into full-fledged Monkeemania. NBC was receiving 50,000 fan letters per week and Monkees merchandise could barely meet demand. As the adulation mounted, so did rumors that the Monkees did not play on their own records and as the controversy spread, the Monkees quickly scheduled a live show to silence their critics. Wishing to avoid the main media centers, they scheduled their first show on December 3, 1966 in Honolulu, HI. The show was hugely successful and gave the Monkees the confidence to schedule 12 more shows for a mini tour of the U.S. Midwest. Strangely enough, the Jimi Hendrix Experience joined them briefly on the tour as the opening band. Not wanting to pass up the publicity, Hendrix accepted the gig, but soon left for a more mature audience that could better appreciate his music.

While on tour in Cleveland, the Monkees discovered a newly released LP in the record stores (More Of The Monkees), which is a hodgepodge collection of various songs recorded for the show that included the 'I'm A Believer' b/w '(I'm Not Your) Stepping Stone' 45. They were understandibly incensed that an album had been released without their consent or even their knowledge, and were further angered by Kirshner's liner notes, highlighting his prized songwriters in detail before even mentioning the Monkees by name. A meeting was called and the Monkees and Kirshner had it out. The engagement ended with Nesmith putting his fist through a wall and yelling to one of Kirshner's party, "that could have been your face!". Raybert had to step in and negotiate a compromise that allowed the Monkees to prove themselves in the studio and also reduced Kirshner's ultimate decision-making power.

Having proved their worth as a live attraction and in the studio, the Monkees faced the tougher task of recording an album by themselves. With Douglas at the helm, they spent six grueling weeks recording Headquarters, the bands third album. The Monkees handled nearly all instrumentation (producer Douglas played occasional bass) and everyone chipped in with various compositions. The result was excellent and somewhat amazing considering they had only been playing together for a few short months. Nesmith starts off the album with one of their best rockers, 'You Told Me', which features some fine banjo playing by Tork. Jones sings some of their most lovely songs such as 'Forget That Girl' and 'Shades of Grey' and Tork contributes with the hippie anthem 'For Pete's Sake', which became the TV show's closing them in the second season. Dolenz's protest song 'Randy Scouse Gift' shot to #1 in England as his drumming, though rudimentary, was appropriate for the feel of the album. Headquarters hit the top spot for a few weeks in the U.S. before being knocked out by The Beatles' landmark LP Sgt. Pepper's Lonely Hearts Club Band. On an interesting side note, about this time Jones became the short lived producer and manager of the Texas turned L.A. band the Children.

As season two of their TV show began airing, the Monkees went back into the studio to record the follow up to Headquarters. For the LP Pisces, Aquarius, Capricorn & Jones Ltd., the Monkees chose to add some session musicians to speed up the recording process. Eddie Hoh was brought in on drums, freeing up Dolenz to play moog synthesizer on songs such as 'Star Collector' and Nesmith's very psychedelic 'Daily Nightly'. 'Pleasant Valley Sunday' became the next single (another Top 10 hit) and showcases a very strong guitar riff, compliments of Nesmith, and dominant vocals by Dolenz and Jones. Other standout tracks include the breezy 'Door Into Summer', 'What Am I Doing Hangin' Round' and 'Love Is Only Sleeping'. It's also interesting to note that at this time, Nesmith also wrote the Top 10 hit 'A Different Drum' for the Stone Poneys (featuring Linda Ronstadt), further elevating the Monkees' credentials as real and proven artists.

Wanting to appeal to a hipper audience, the Monkees invited such musicians as Frank Zappa and Tim Buckley to appear on the TV show. These additions did very little to bring an edge to the program however, which had started to grow a little stale. As the Monkees toured the world, their label released a fifth album (The Birds The Bees & The Monkees) in the spring of 1968, which is a haphazard collection from the dozens of tracks that had been recorded for season two. Though it includes the two hits 'Daydream Believer' (another #1 chart topper) and 'Valleri', the record was their weakest to date. At the conclusion of season two, the Monkees conceived a new format for the show, but it was rejected and the program was cancelled.

Undaunted, they set forth on their next project, a feature length movie titled Head. Co-written with budding actor Jack Nicholson, the Monkees' psychedelic and anti-war film was released in late 1968. It was universally panned by critics and never got a general release. The film, which exposes the Monkee myth, was over the heads of their young fans and didn't interest anyone older. Although it dropped without a trace, the accompanying soundtrack album is quite good. Tork's two contributions 'Long Title' and 'Can You Dig It?' are among his finest compositions, while the film's theme song 'The Porpoise Song' has become an all time classic psychedelic track.

Without the TV show to promote their songs, the Monkees' chart action began to wane. A television special titled 33 1/3 Revolutions Per Monkee aired in early 1969 and it too fared poorly. Tork was the first to leave the sinking ship as the remaining three pressed on with another tour and the LP Instant Replay. By now, the Monkees recordings had come full circle with each member singing and producing his own songs with the aide of session musicians, no longer working as a unit in the studio. Although many fine musicians were featured on their songs such as Glen Campbell, Stephen Stills, Neil Young, Hal Blaine, Doug Dillard, Buddy Miles, Ry Cooder, Dewey Martin, Clarence White and Jerry Yester to name a few, their productions lacked the spontaneity of their previous works. Nesmith left in late 1969 after the The Monkees Present LP and Jones and Dolenz recorded the listless Changes in 1970 as a duo, to fulfill contractual obligations.