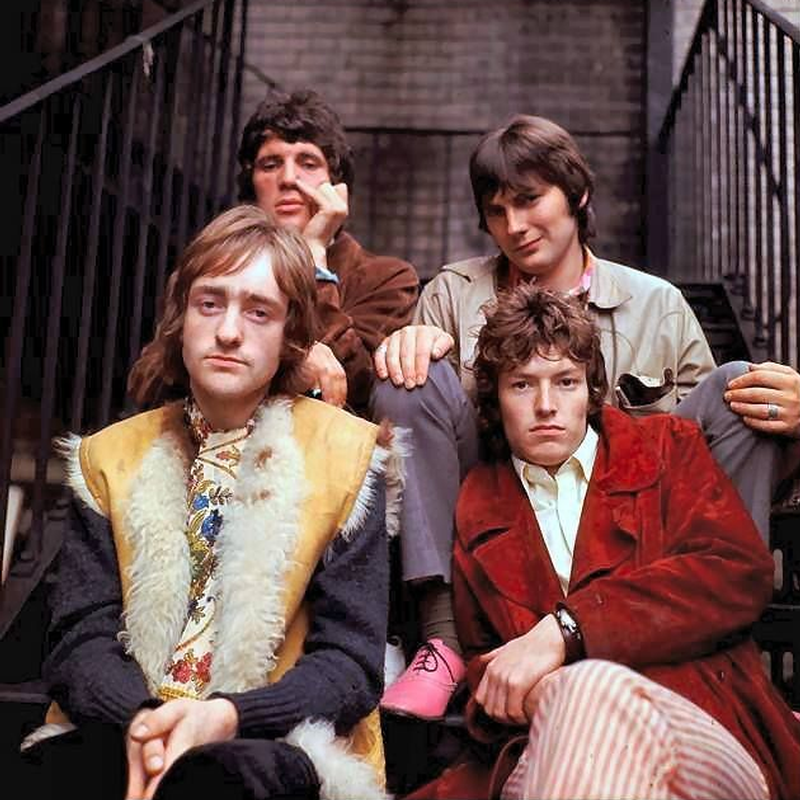 Traffic is considered by many to have been one of the top British psychedelic bands of the era. Like other heavy hitters of the time, they successfully incorporated jazz and improvisational techniques into their music through extremely creative songwriting and the well placed use of eclectic instruments like the Mellotron, harpsichord, sitar, and various woodwinds.

The band formed in April, 1967 when at the ripe old age of 18, Stevie Winwood (keyboards, guitar, vocals) decided it was time to leave the Spencer David Group and form his own ensemble. Winwood was a musical child prodigy and had begun playing professionally when he was 14, so he felt it was time to branch out and immerse his talents in the budding realm of psychedelia. He enlisted the help of his friends Jim Capaldi (drums, vocals, keyboards) and Dave Mason (guitar, bass, vocals) who were playing in Deep Feeling, and he had met years earlier when their previous group the Hellions was gigging in the same German club at the Spencer David Group. To round out the bunch, Chris Wood (woodwinds), who had formerly been a member of Locomotive, was recruited.

Traffic kicked things off by jamming at a club called the Elbow Room in Birmingham and it was Capaldi who came up with the moniker as they were all trying to cross a busy street in the town of Dorchester. It wasn't long thereafter, that they sequestered themselves in a private cottage near the rural village of Aston Tirrold, Berkshire to write and rehearse. They then signed to Island Records and issued their debut single ('Paper Sun') in May, 1967, which hit well in the U.K., peaking at #5, but only sold modestly in the U.S. where it charted at #94 on the Billboard Hot 100. As a side note, this record was the first to debut the band's "Wheel of Fortune" logo designed by Carol Duskin, a jeweler by trade. Duskin was an old friend of the band who adapted the design (with some input from Wood and Capaldi) from the seal of the mythical Myrrdin, an ancient deity later known as Merlin in Arthurian legend. With its four arrows representing the members of the group, Myrrdin's wheel fitted with Traffic's folksy, mystical leanings.

In the summer of '67, a second 45 ('Hole In My Shoe' b/w 'Smiling Phases') was released, which did even better than the first, reaching the #2 spot on the U.K. charts. According to Mason, this was the first song he had ever written and wanted to take the band in more of a pop direction. The other three strongly disagreed, wanting Traffic to have a less commercial vibe, which created tension within the fold. A third single ('Here We Go 'Round The Mulberry Bush') followed in November and found the band collaborating with the Spencer David Group on the soundtrack to a film of the same name. An LP titled Mr. Fantasy was finally issued a month later and houses several outstanding songs, including the mind blowing 'Dear Mr. Fantasy'. By this time however, Mason had quit due to the aforementioned creative differences, but within a few months later had made up with his mates and rejoined.

In the spring of 1968, the band started work on a second, self-titled LP which was finally released in the fall. This album is also quite good and includes the Mason classic 'Feelin' Alright?', which was later successfully covered and made famous by Joe Cocker. Other highlights include 'Cryin' To Be Heard', 'Forty Thousand Headmen' and 'Who Knows What Tomorrow May Bring'. By late '68, Mason had left again however, which forced the group to tour the U.S. as a trio. Unhappy and frustrated with this, Winwood left in early 1969 without warning or indication to form Blind Faith with Eric Clapton. During this hiatus, a third Traffic LP titled Last Exit was issued in the spring, which includes the outstanding 'Medicated Goo' and 'Just For You'.

In the fall of 1969, Blind Faith dissolved and Winwood began working on a solo album with the help of Capaldi and Wood. This project evolved into a fourth Traffic LP titled John Barleycorn Must Die, which was issued in the summer of 1970 and became their most successful work to date. The need to tour on the album drove the trio to formally add ex-Family and Blind Faith alumnus Ric Grech on bass. In 1971, the band further expanded with the addition of "Reebop" Kwaku Baah (percussion), Jim Gordon (drums) and the return of Mason. This lineup successfully toured, mostly around the U.S. and issued a live LP titled Welcome To The Canteen in the fall of that year. Mason however was hit and miss and had finally left Traffic for good before the end of the year and the release of their next LP (The Low Spark Of High Heeled Boys). By this time, the group had become more popular in the U.S. than their native country, with the album shooting to #7 in the States, but not charting at all in the U.K.

A winter 1971-72 tour had to be canceled when Winwood fell into ill health due to what would later be diagnosed as acute peritonitis. Grech and Gordon then left, and Capaldi took this free time to work on releasing a solo album. In early 1972, Winwood was back on his feet and Traffic was resurrected again with new members David Hood (bass) and Roger Hawkins (drums) who had recently worked with Capaldi on his solo project. It was this lineup that toured the U.S. with one of the shows at the Santa Monica Civic Auditorium being captured extensively on multi-track audio and color film, making it a must see for any Traffic fan. In the spring of 1973, the band issued another studio LP (Shoot Out At The Fantasy Factory), which includes a few outstanding tracks that were actually recorded in 1971 around the same time as "Low Spark". This album was panned by critics, but also sold quite well prompting another major tour and then a double-live LP that was simply titled On The Road.

After the tour, Hawkins, Hood and Baah left, and Rosko Gee was brought in to play bass. A final studio LP (When The Eagle Flies) was then issued in 1974, which also sold quite well in the U.S., hitting the #9 position on the charts. The release of the album was then followed by another U.S. tour, but by this time, Winwood was having peritonitis relapses and Wood was suffering from drug addiction and depression. It all finally came to a head when in the middle of a Chicago show, Winwood abruptly walked off stage. The following day, he left the tour without a word to anyone, leaving the rest of the band waiting for him at the venue for that night's scheduled performance, which never came to fruition. Feeling Winwood had been integral to Traffic's music, the remaining members opted not to continue the band without him.

In 1994, the surviving members of Traffic reunited (Wood had since passed) when they began opening shows for the Grateful Dead. They then issued a studio LP titled Far From Home and embarked on a reunion tour of their own, which TWOS was lucky to see. In 2004, the group was deservedly inducted into the Rock and Roll Hall of Fame and Winwood continuous to tour to this day and play some of the Traffic classics like "Low Spark" and "Mr. Fantasy", which have become classic rock staples.

I Just Want You To Know

'Here We Go 'Round The Mulberry Bush' Motion Picture Soundtrack

Welcome To The Canteen

Shoot Out At The Fantasy Factory

This compilation CD contains the following songs by this artist that are played on TWOS:
- Paper Sun