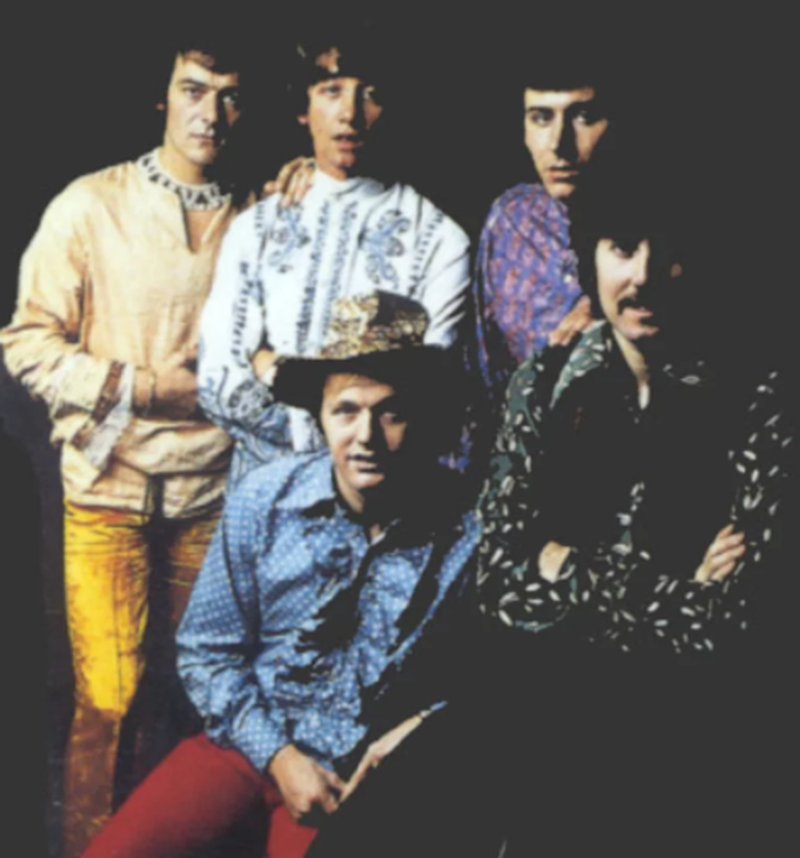 Although typically classified as one of the biggest British Invasion bands of the 60s, the Hollies weren't nearly as popular in the U.S. as they were in their home country of England. In fact, they were arguably the third most popular 60s pop band in the U.K., surpassed there only by The Beatles and Rolling Stones. Out of a staggering 29 singles that the group issued in Britain from 1963 into 1974, only one (in 1972) failed to make the U.K Top 40, with most breaking well into the Top 10! They had a squeaky clean image (even more so than the Fab Four) and their trademark was a well crafted, higher pitched 3-part vocal harmony.

The Hollies were formed in 1961 in Manchester by childhood chums Graham Nash (guitar, vocals) and Allan Clarke (vocals), who began billing themselves as the Two Teens. With the addition of Eric Haydock (bass) and Don Rathbone (drums) they changed their moniker to the Fourtones, then the Deltas, and finally settled on the Hollies by the end of that year. The name reportedly originated from the fact that the group was playing several gigs around Christmas time and chose the moniker to capitalize on the holiday.

In January, 1963, they were discovered by Ron Richards playing at the Cavern Club in Liverpool, who signed them to Parlophone without hesitation. Before issuing their debut single in the spring of 1963, Tony Hicks (guitar, vocals) was added to the ensemble making them a 5-piece. Later that year, Rathbone gave up the skins to become one of the band's managers and was replaced by Bobby Elliot (drums) who was an old friend of Hicks. It was this lineup that issued their first LP titled Stay With The Hollies, which although containing nothing but covers, still shot to #2 on the U.K. album charts.

By 1965, the Hollies found themselves well on their way to superstardom with four Top 5 U.K. hits, including their #1 smash 'I'm Alive'. That year they also embarked on their first U.S. tour and issued a self-titled third LP, which made it to #8 on the U.K. charts. Like many other British bands of the time, 1966 saw the Hollies veer towards a more complex, psychedelic sound starting with the outstanding, upbeat 'Can't Let Go', which hit #2 in the U.K. Later that summer, the group had their first major hit in the U.S. with the more poppy 'Bus Stop', which peaked at #5 there. It was also around this time that Haydock left the fold and was replaced by Bernie Calvert (bass, keyboards).

In 1967, the Hollies delved further into the realm of psychedelia, while still managing to retain solid and catchy pop hooks in most of their compositions. This is clearly evident in songs like 'Carrie Anne', 'All The World Is Love', 'King Midas In Reverse' and the Evolution LP only track 'Then The Heartaches Begin'. The fall of 1967 saw the release of the band's most overtly psychedelic LP (Butterfly), which includes the dreamy 'Would You Believe' and the spacey 'Try It'. Surprisingly, the more psychedelic the Hollies got, the less records they sold, which prompted them to revert back to a more basic and poppy sound in 1968. This didn't sit well with Nash however, who was interested in writing more serious, complex compositions and taking the band in a more experimental direction. This difference of opinion would finally lead to his departure and the introduction of ex-Swinging Blue Jeans member Terry Sylvester (guitar, vocals) who took his place in early 1969. Nash would of course go on to reap huge success in the supergroup Crosby, Stills & Nash.

In 1969, the Hollies released their eighth studio LP titled Hollies Sing Dylan, which was as advertised, an album made up completely of Bob Dylan cover songs. Although the record was panned by many critics, it still managed to reach #3 on the U.K. charts. That year they also scored a huge hit on both sides of the Atlantic with the ballad 'He Ain't Heavy, He's My Brother'.

The Hollies continued to experience success into the 70s with more huge hits like 'Long Cool Woman In A Black Dress' and 'The Air That I Breath'. In the early 80s, Graham Nash briefly reunited with the group, which was kicked off by a 1981 appearance on the British TV music show Top of the Pops to promote their single 'Holliedaze' that ended up rising to #28 on the U.K charts. In the summer of 1988, 'He Ain't Heavy, He's My Brother' was featured in a TV commercial for Miller Lite beer, prompting the song to be officially reissued in the U.K. Amazingly, it reached #1 and established a new record for the length of time between chart-topping singles for one artist - a staggering 23 years.

To this day The Hollies still tour with two original members, Hicks and Elliott. After Clarke's retirement in 1999, he was replaced by Carl Wayne, former lead singer of the Move. Wayne only recorded one song with them however ('How Do I Survive'), which was the last (and only new) track on the band's 2003 Greatest Hits CD. After Wayne's death from cancer in August, 2004, he was replaced by Peter Howarth. In 2006, the Hollies' released their first new studio album ('Staying Power') since 1983 and continue to play live shows to the day.

This compilation CD contains the following songs by this artist that are played on TWOS:
- All The World Is Love