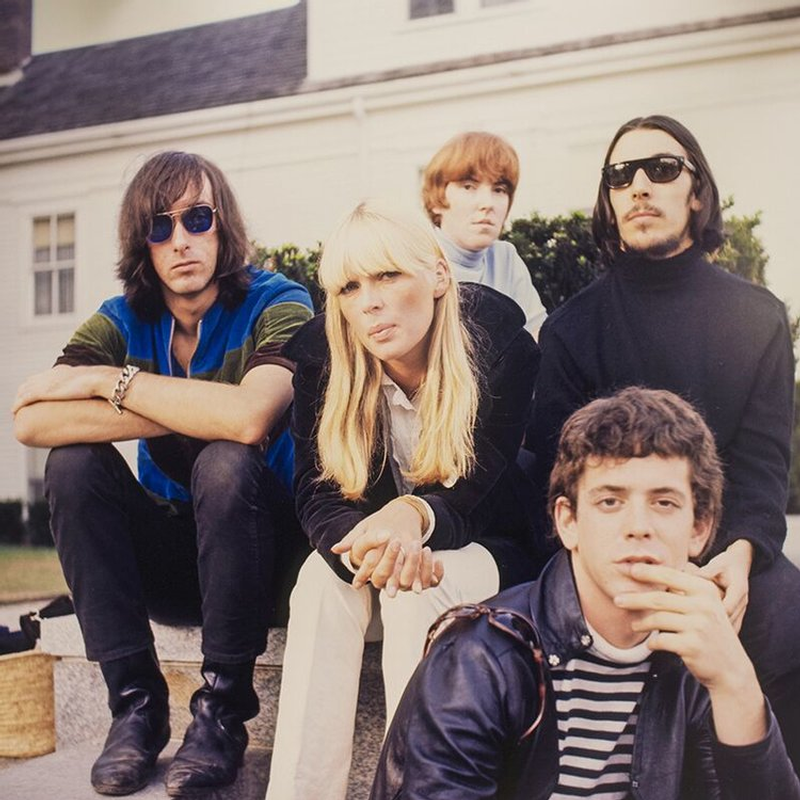 Though not that well known in their time, the New York City based Velvet Underground eventually became a hugely influential band, instigating the punk movement of the 1970s and inspiring countless other musicians and songwriters. Led by Lou Reed (lead vocals, guitar, piano), the group's music is one of the few examples where the term "ahead of their time" actually applies; amazingly, their catalog finally began selling consistently when reissued in the mid 1980s.

By the time Reed had enrolled at Syracuse University in the early 60s, he had already been playing professionally for some time. Syracuse had a budding music scene which also included Felix Cavaliere (later of the Rascals), Mike Esposito (later of the Blues Magoos) and Garland Jeffreys. It was there that Reed met fellow guitarist Sterling Morrison (guitar, bass, vocals) and eventually got a job as a staff writer at Pickwick Records, a company known for low-budget, trendy records. As a joke, Reed wrote 'The Ostrich' and Pickwick, thinking they had the latest dance craze on their hands, recorded it without Reed and released it under the band name the Primitives.

Born in South Wales, John Cale (viola, bass, organ, vocals) was a classically trained musician influenced by John Cage. He later moved to New York City and formed the group the Dream Syndicate, mixing avant-garde music, performance art and classical elements. Cale befriended Reed in 1965 and they quickly formed a group after a chance meeting with Morrison, Reed's old Syracuse buddy. Moving in together, they met Angus MacLise (drums, percussion), who lived in the same apartment, and began playing as the Falling Spikes and the Warlocks. MacLise was involved with underground filmmaker Piero Heliczer, who was organizing Launching The Dream Weapon a multimedia event that included film projection, poetry, dancing, lights and music. Heliczer began using Reed, Cale, Morrison and MacLise as the unseen musicians behind the film screen of several underground films and other theatrical events in the summer of 1965.

By mid 1965, the group had settled on the name Velvet Underground (taken from an sadomasochism book of the same name) to underscore the band's involvement with underground filmmaking. They had also replaced MacLise with Maureen "Mo" Tucker on drums and began a short residence in the Greenwich Village club Cafe Bizarre where they were discovered by pop artist Andy Warhol. Their unconventional music blatantly described heroin use and sadomasochism and was wryly delivered in Reed's monotone voice. Reed's lyrics, though shocking at times, were poignant and moving. Much of their sound consisted of guitar feedback, Cale eerily playing his electric viola and Tucker hammering out a hypnotic beat. Warhol immediately signed them to a management contract and bought them new equipment as rehearsals commenced at Warhol's studio, which he called the Factory.

During this time, Warhol conducted various multimedia events, including Andy Warhol, Up-Tight. The Velvet Underground applied their unique sound to Warhol's avant-garde happenings and were then persuaded by him to allow one of his other performers, Nico, to sing with the band. The German born Nico was a model who had appeared in Federico Fellini's film La Dolce Vita and had also already cut a single in London on the Immediate label. Her icy, Euro look fit Warhol's media tapestry perfectly, but was not the ideal musical addition to the Velvet Underground; despite this, the band reluctantly agreed to bring her in. Warhol's next project was the Exploding Plastic Inevitable (EPI), another multimedia frenzy that he took on the road. On the strength of Warhol's name alone, the EPI caught the attention of the media and was attended by many of rock's elite, including Bob Dylan, David Crosby, Brian Epstein, and Sonny Bono. The EPI was then booked to play at The Trip nightclub in L.A. for the entire month of May, 1966 where they proceeded to fascinate and mortify audiences. Unfortunately, The Trip was closed down by the police during their first week, but the Velvet Underground soon bounced back, accepting an invitation to play two nights at the Fillmore Auditorium in San Francisco. It is important to note the influence that the Velvet Underground had during this short stay at the Fillmore, which saw them designing and building the light show. Before their arrival, the Fillmore's "light show" consisted of "a slide projector with a picture of the moon" according to Sterling Morrison. Former Harvard student and electronics lighting wizard Danny Williams stayed behind to continue light design at the Fillmore, joining back up with the EPI later in Chicago.

With the closing of The Trip, the Velvet Underground used their time off to record a debut LP. Though Andy Warhol receives credit as "producer" of The Velvet Underground & Nico, the album was actually produced by Tom Wilson (Warhol was merely lending his name to the album jacket for promotional purposes). Wilson was in charge of MGM's subsidiary Verve label, which was to be a more psychedelic outlet for the parent company. Wilson had been instrumental in electrifying folk music with his proto-psychedelic treatment on Simon & Garfunkel's 'The Sounds Of Silence' and his production on Dylan's Highway 61 Revisited LP. The album varies from poppier tracks like 'There She Goes Again' to more avant-garde exercises like 'The Black Angel's Death Song', which almost dares people to listen. In between are punky rock songs like 'Run, Run, Run' and, of course, the compelling 'Heroin'. Nico's uncomfortable delivery on 'All Tomorrow's Parties' and 'Femme Fatale', hardly dampen Reed's fine lyrics and the music of the band. One of the most popular tracks on the album is 'Venus In Furs' with its droning viola, hypnotic beat and Reed's excellent delivery. The album's topics such as hard drug use, scoring heroin, and sadomasochism were hardly what audiences were used to hearing, but due to its subject matter, it quickly established a notorious reputation in rock circles.

By the next LP (White Light, White Heat), the Velvet Underground had ditched Nico and continued their assault on conventional ears. The frenzied title track was a "too the point" drug song, which clearly illustrated that the band was not backing down from the topics of their first album. 'The Gift' shows off the band's instrumental chops with its driving rhythm and guitar feedback, as Cale's accent-laden recitation sets the tone for an unlikely tragic ending. The mellow, but very pretty 'Here She Comes Now' is a highlight and the psychedelic 'Lady Godiva's Operation' offers another rare Cale vocal. Unfortunately the album made little impact, and without Warhol's name involved, the band found itself lost in the ever-expanding pop music world.

Their self-titled third LP saw a radical change in the band's sound. Most importantly, Cale had left the fold, unable to coexist with the head-strong Reed. This, along with their disassociation from Warhol's scene, prompted the band to move away from avant-garde experimentation and settle into more of a mainstream rock direction. The theft of their equipment at a gig further contributed to the alteration of their sound. Reed's songwriting became much softer with songs like 'Jesus', 'Pale Blue Eyes', and 'Candy Says'. Cale's replacement Doug Yule (bass, organ, vocals, guitar, piano) added to this poppier image with his soft voice and youthful looks. Two of the Velvet Underground's best tracks, 'What Goes On' and 'Beginning To See The Light' prove that they could still rock with the best and Tucker's vocal delivery on 'Afterhours' shows that they actually had a sense of humor. Unfortunately, this album also produced zero hits and only sold modestly.

In 1969, the weary band continued recording in the studio for what was to become a fourth LP, but it never materialized. Disagreements with their record label saw many of the songs shelved (they would finally be officially released in 1985 on the compilations VU and Another View). One of the gems that got caught in the undertow was the outstanding 'The Ocean', one of the band's last stabs at psychedelia, which features John Cale on viola and the droning guitars of Reed and Morrison. This fluid piece finally became available on the 1995 box set Peel Slowly And See.

In 1970, the group switched to the Atlantic label for the release of their fourth and final LP titled Loaded. Reed didn't hide the fact that he was trying to write hit songs, and hits they may have become if the record company had pushed the album more. In any case, it displays the talent of Reed as a songwriter more than anything. The polished performances on 'New Age' and 'Rock And Roll' are clearly the work of a band that had become comfortable in the studio. Rockers like 'Train Coming 'Round The Bend' and 'Cool It Down' are balanced by the softer 'Who Loves The Sun'. Unfortunately, the label couldn't leave well enough alone and edited several of the songs, most notably, removing a vital section from 'Sweet Jane', one of their best tracks. Near the album's completion, Reed had had enough and abruptly quit to concentrate on a solo career. The group disbanded and went their separate ways (Doug Yule released an album under the Velvet Underground name in 1973, but it is not considered to be a part of their official catalog).

The 1970s saw Reed become a solo star and Cale also establish a strong following. An unlikely reunion took place in 1993 as the group reunited for a brief European tour. A live CD was released, but a planned U.S. tour and appearance on MTV Unplugged came to a screeching halt when the band realized that they could not cope with Reeds demands. Any hopes for another reunion were squelched with the death of Sterling Morrison from non-Hodgkin's lymphoma in 1995.

This 4 CD box set also contains the rest of the songs by this artist that are played on TWOS.