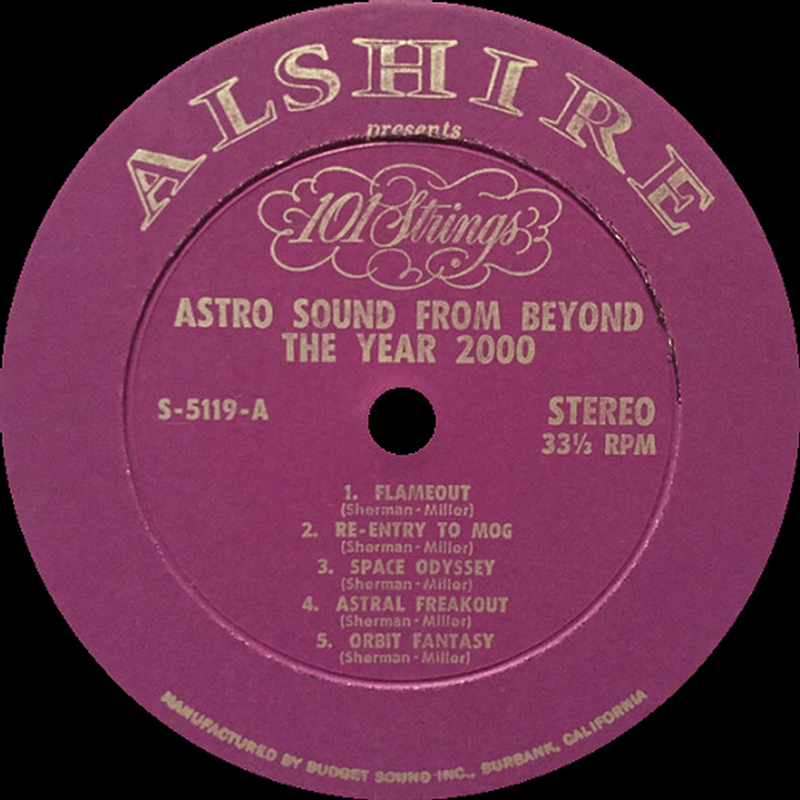 101 Strings was a highly successful orchestration franchise created in 1957 by record producer Dave L. Miller and his Philadelphia based Somerset label. The original 101 Strings orchestra was in reality the German based Orchester des Nordwestdeutschen Rundfunks Hamburg, which was subcontracted by Miller and actually included a whopping 124 string instruments. Their signature sound was coined "the sound of magnificence" and centered around a laid back, string heavy ambiance. They recorded a number of different music styles, including pop hits of the time and even an LP full of Beatles songs.

In 1964, Miller sold the franchise to successful record label distributor Al Sherman, who promptly renamed the Somerset label to Alshire and moved the 101 Strings recordings from Germany to London. Sherman did however retain Miller as a partner to oversee production and A&R. The LP featured here on TWOS (Astro-Sounds From Beyond The Year 2000) was issued in 1968 and includes a handful of outstanding, psychedelic instrumentals co-written by Sherman and Miller. It should be noted that most of the album's tracks were previously released in 1967 by Sherman and Miller under their studio concoction the Animated Egg. The songs on both LPs are very similar with the 101 Strings versions having tighter arrangements, more phasing and the addition of synthesizer.

All in all, the 101 Strings brand released 108 different LPs and sold over 50 million records worldwide until finally commencing in 1981. It's TWOS' opinion that no record collection is complete without at least one 101 Strings album.

Astro-Sounds From Beyond The Year 2000

This compilation CD contains the following songs by this artist that are played on TWOS:
- A Disappointing Love Affair With A Desensitized Robot
- Barrier X-69
- Flameout