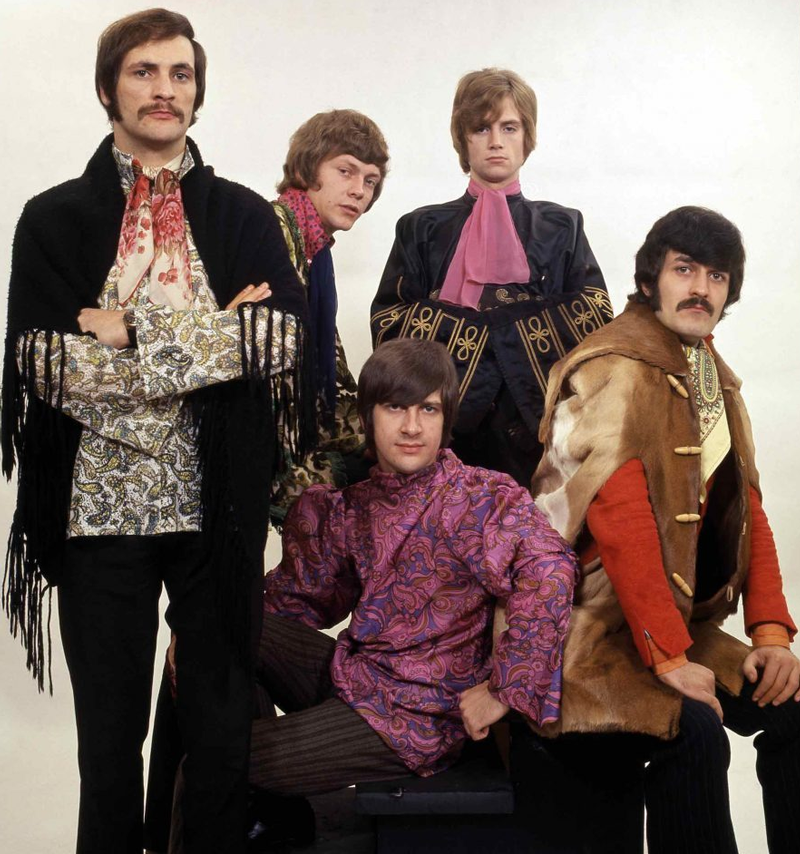 The Moody Blues are one of those rare ensembles that produced several (seven to be exact) extremely original and consistently high quality LPs from the late 60s through early 70s. The group successfully combined progressive rock with complex orchestration, most notably on their 1967 LP Days Of Future Passed. Over the years, they have sold more than 70 million albums worldwide and have been awarded 18 platinum and gold discs.

The band hailed from Birmingham, forming in May of 1964 with original members Graeme Edge (drums), Mike Pinder (keyboards, vocals), Ray Thomas (horns, vocals), Denny Laine (guitar, vocals) and Clint Warwick (bass). Their name developed out of a hope for sponsorship from the M&B Brewery that failed to materialize, originally calling themselves the M.B.s and M.B. Five. It didn't take long for the group to sign a record contract with Decca, releasing a debut 45 ('Lose Your Money' b/w 'Steal Your Heart Away') later that year, which unfortunately fizzled. Their second single however ('Go Now!' b/w 'It's Easy Child'), also issued in 1964, is what launched their career, topping the charts in the U.K. and reaching #10 in the U.S. A debut LP (The Magnificent Moodies) followed in the summer of 1965 to further capitalize on 'Go Now!', but it didn't sell that particularly well.

1966 was a pivotal period for the band with Laine and Warwick leaving, being replaced by Justin Hayward (guitar, vocals) and John Lodge (bass, vocals). Laine would of course go on to reap huge success as one of the key members of Wings with Paul McCartney from 1971 to 1981. This change breathed new creative life into the group as they began releasing outstanding singles starting in the spring of 1967 with 'Fly Me High' followed by 'Love And Beauty' later that year. In late 1967, the ensemble signed to Decca's more progressive Deram label and issued the outstanding concept LP Days Of Future Passed, which chronicles the passing of a single day from dawn into night through highly original songs intertwined with complex instrumentation performed by Decca's London Festival Orchestra. In production and arrangement, the album drew inspiration from the pioneering use of classical instrumentation by The Beatles, to whom Pinder had introduced the Mellotron to earlier that year. Surprisingly, the record only scored modestly on the charts when it debut, taking until 1972 for fans to finally recognize its greatness.

Their summer of 1968 third LP (In Search Of The Lost Chord), which abandoned the heavy orchestration of the previous record, houses another strong set of tracks including the classic 'Legend Of A Mind', a song written by Ray Thomas in tribute to LSD guru Timothy Leary (four members of the group had reportedly dropped LSD together at the start of 1967). Other songs of note include the hard driving rocker 'Ride My See-Saw', 'Dr. Livingstone, I Presume' and the heady 'The Best Way To Travel'. A fourth LP (On The Threshold Of A Dream) was issued only nine months later and boasts an even stronger set of songs from the prior, including the upbeat 'Lovely To See You' and 'To Share Our Love', and the much more placid 'Have You Heard' and 'Are You Sitting Comfortably'. The album was their best-selling to date and the first to hit #1 in the U.K. and #20 in the U.S.

Late 1969 saw the release of the group's fifth album (To Our Children's Children's Children) on their newly formed Threshold Records label, which was named after the band's previous album from earlier in the year. The record is just as strong or even stronger than their last and hit #2 in the U.K. and #14 in the U.S. The band found most of the songs impossible to perform live however due to extremely lush orchestrations and a great deal of overdubbing. A sixth LP (A Question Of Balance) was issued in the summer of 1970 and is much more stripped down instrumentally than past efforts to allow for the songs to be played live. Nonetheless, the record is excellent and topped the U.K. charts and hit #3 on the U.S. charts. Classic songs include Hayward's 'Question' and 'It's Up To You'.

A seventh LP (Every Good Boy Deserves Favour) was released in July, 1971 with the title being borrowed from a mnemonic used to remember the musical notes that form the lines of the treble clef: EGBDF. This album saw the return of the lush orchestration that had become their signature sound, but it's also considered by many to have been their weakest effort by far since the addition of Hayward and Lodge ("Moodies Mark II"). The record did manage to sell very well however hitting #1 in the U.K. and #2 in the U.S. Late 1972 saw the release of an outstanding eighth album ironically titled Seventh Sojourn. This record includes a slew of great tracks including the rocker 'I'm Just A Singer (In A Rock And Roll Band)' and the hypnotic 'When You're A Free Man'. It deservedly hit #1 in U.S. and #5 in the U.K., and was the first time one of their albums charted better in America than England.

After a gamut of successful albums, the band took a break from issuing new material and toured until the spring of 1974 when they finally decided to go on an official hiatus. Reasons for this included the pressures of running their own record label, their support organization growing so huge that they didn't even recognize some of their employees, and most notably their fans becoming so obsessive to the point of worship, which greatly disturbed them. In 1975, Hayward and Lodge released a solo LP titled Blue Jays, which sold very well in both the U.S. and U.K. After three years and multiple solo albums by various members, the Moodies decided to reunite in 1977 with Pinder eventually dropping out and being replaced by former Yes keyboardist Patrick Moraz before finishing the recording of their ninth, 1978 LP curiously titled Octave. This record was a commercial success as well as their next effort in 1981 (Long Distance Voyager). 1983 saw the release of The Present, which compared to past LPs, only charted modestly.

In 1986, the Moody Blues enjoyed renewed success with the release of the LP The Other Side Of Life, which features a more modern pop sound and appealed to a new, younger audience. The album includes the U.S. Top 10 hit 'Your Wildest Dreams', which garnered a Billboard Video of the Year award after being frequently featured on MTV. 1998 saw the issue of the album Sur La Mer, which follows the same stylings as its predecessor and contains another Hayward hit ('I Know You're Out There Somewhere'), which is a sequel to 'Your Wildest Dreams'. In the 1990s, the group issued two more studio LPs and toured to large arena sized audiences throughout the world. Moraz was fired from the band in 1991 and Thomas retired in 2002, reducing the Moodies to a trio (Hayward, Lodge and Edge). In 2003 they issued a Christmas themed LP titled December and still continue to tour on and off to this day.

In Search Of The Lost Chord

On The Threshold Of A Dream

A Question Of Balance

This 2 CD compilation also contains many of the other songs by this artist that are played on TWOS.

This compilation CD contains the following songs by this artist that are played on TWOS:
- Nights In White Satin

This compilation CD contains the following songs by this artist that are played on TWOS:
- Love And Beauty