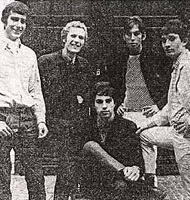 Not much is known of this London outfit that issued one 45 ('Riding A Wave' b/w 'Trot') on the Pye label towards the end of 1968. The only confirmed member of the band was Mark Ashton (drums), who wrote both sides of the record. The A-side is quite good and an excellent example of the late-60s experimental British pop-psych genre.

It has also been confirmed that the band went on to support the Nice during their concerts for a stint in 1969.

This compilation CD contains the following songs by this artist that are played on TWOS:
- Riding A Wave

This compilation CD contains the following songs by this artist that are played on TWOS:
- Riding A Wave