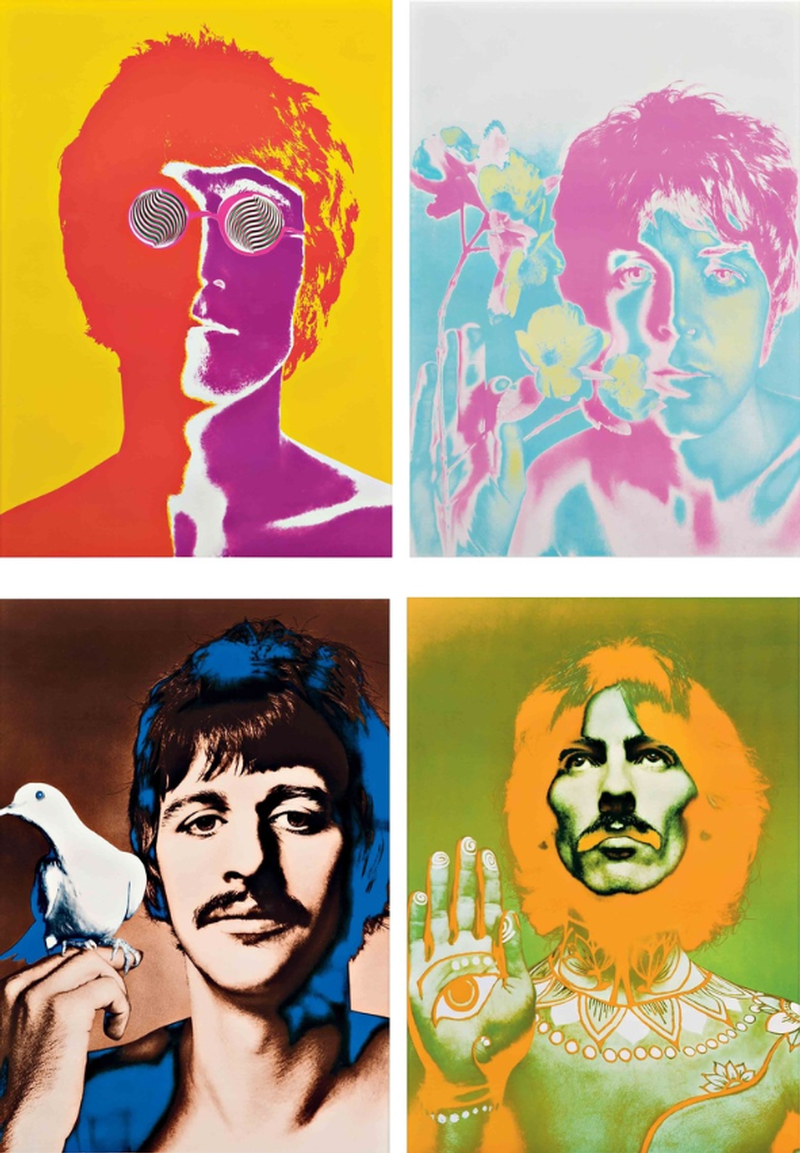 The Beatles' contribution to the psychedelic music scene is perhaps as impactful as their debut single 'Love Me Do', which changed the direction of pop music forever with a groundbreaking new sound and catchy melody. From their first 45 in the autumn of 1962 to their breakup in the spring of 1970, The Beatles showed amazing growth and progression with each record, always at the forefront of the pop music world. The fab foursome was comprised of John Lennon (rhythm guitar, keyboards, harmonica), Paul McCartney (bass, keyboards), George Harrison (lead guitar, sitar) and Ringo Starr (drums, percussion). Much of their staggering success can be attributed to the irresistible songs written by the composition team of Lennon and McCartney who, along with Bob Dylan, have been accepted as the most prolific and influential song writers in pop music history. Proper credit must also be given to Beatles long time producer and arranger, George Martin, who to many is referred to as "the fifth Beatle". As The Beatles' recordings became more sophisticated and adventurous, Martin's production skills, as well as his string and orchestral arrangements, matched the group's compositions stride for stride, as he quickly became the most prolific and well known producer in pop music.

The Beatles early contributions to what was to become the psychedelic movement began in 1964. George Harrison's jangly 12-string electric guitar on 'A Hard Day's Night' was the first major step in new sound distortion, prompting the up-and-coming group the Byrds to base their whole sound on it. Their dual lead guitars also demonstrated a deeper musical texture not heard before in rock, and the late 1964 single 'I Feel Fine' is widely accepted as the first deliberate use of feedback on record. By 1965, the band began branching out with more personal lyrics ('Help!') as well as classical accompaniment ('Yesterday'), paving the way for their groundbreaking, late 1965 album Rubber Soul.

Rubber Soul beckoned the arrival of the album format, resulting in a body of work that is more than just a collection of singles and lesser songs. Album oriented rock soon became the staple of underground stations and FM radio in general. The Beatles also began to experiment with new sounds in the studio, augmenting their pop melodies crafted by Lennon and McCartney with fuzz, Elizabethan piano and 3-part harmonies. Most notable is their use of the sitar (introduced by Harrison), which takes the superb folk-rock song 'Norwegian Wood' to another level by adding a distinctly eastern flavor. The mid 1966 single 'Paperback Writer' b/w 'Rain' utilizes multi-tracked vocals and backwards tapes, creating an ethereal feel. This direction was continued on the Beatles' next LP release, Revolver.

Revolver demonstrates even more experimentation with sound and texture, as well as lyrics that clearly seem to reflect the use of hallucinogenic drugs. 'Got You Get You Into My Life' and 'Tomorrow Never Knows' are about marijuana and LSD respectively, and 'Dr. Robert' suggests that recreational drug use had infiltrated the upper class. Songs with harder edges and distorted guitars ('She Said, She Said' and 'Taxman'), are balanced by Indian philosophy ('Love You To') and orchestrated balladry ('Eleanor Rigby').

After the release of Revolver, The Beatles took a small siesta for the first time in their career to pursue artistic interests outside of the band. This much needed time off and the decision to stop touring allowed them to return to the studio recharged and focused on their next project, Sgt. Pepper's Lonely Hearts Club Band. Heavily influenced by the Beach Boys' pivotal LP Pet Sounds, the album was immediately heralded as a pop masterpiece and soon many bands, new and established, followed The Beatles into this uncharted psychedelic land. Sly drug references are detected in 'Lucy In The Sky With Diamonds', 'Fixing A Hole' and 'A Day In The Life', and musically the album takes the listener through every style imaginable: Indian, avant-garde, music hall, classical and rock. Producer George Martin was able to interpret the Beatles complex ideas and augment them with brilliant scores that did not diminish the core of the songs. "Sgt. Pepper" is considered by many rock critics to be the definitive psychedelic soundtrack.

The Magical Mystery Tour LP and film, released in late 1967, continued the sophisticated production and song craftsmanship that the band had explored with "Sgt. Pepper". The groundbreaking single 'Strawberry Fields Forever' b/w 'Penny Lane' and world broadcast of 'All You Need Is Love' further elevated The Beatles as pop culture's mouthpiece. The downright peculiar 'I Am the Walrus' shows the band at perhaps their most psychedelic, while the title track, 'Blue Jay Way' and 'Baby Your A Rich Man' employ more studio trickery and exotic instrumentation.

A vacation of sorts to India in the spring of 1968 provided Lennon and McCartney (and now the budding composer Harrison) the time to write a wealth of new material, resulting in a self-titled double album that returned The Beatles to guitar-based rock. "The White Album", as it soon came to be known, contains a number of conflicting and eclectic music styles, but somehow still manages to flow nicely from track to track. From the multi-layered guitars in 'Dear Prudence' and hard rock of 'Helter Skelter', to the gentle simplicity of 'Julia' and 'Blackbird', the group illustrates their enormous range and diversity, yet manages to make it all work together as a single, cohesive masterpiece.

The extreme personal nature of the songwriting on "The White Album" prompted the band to "get back" to their roots with a live studio album featuring no overdubs. This project (what would eventually become the Let It Be album) proved at the time to be too frustrating for The Beatles, who had come to rely so heavily on studio production, that they temporarily abandoned the project to make a "proper" studio LP. The majestic Abbey Road combines great melodies, adventurous 3-part harmonies and the band's incredible flair for melody. Harrison's writing also blossomed as he contributed the two most popular songs of the album, 'Something' and 'Here Comes The Sun'. Lennon and McCartney took bits of unfinished songs to concoct a stunning medley on side two that showcases some of the bands finest playing. The swampy 'Come Together' displays the band at their funkiest and became yet another one of their 27 #1 singles, a feat that no other band has ever come close to matching.

By the spring of 1970, The Beatles had gone their separate ways, leaving behind a catalog of music that continues to strongly influence artists today. All members of the Fab Four went on to have extremely successful solo careers, still working together occasionally in minor form or fashion. John Lennon was cut short in life, assassinated on December 8, 1980 at the age of 40. George Harrison died of cancer on November 29, 2001 and was 58 years old.