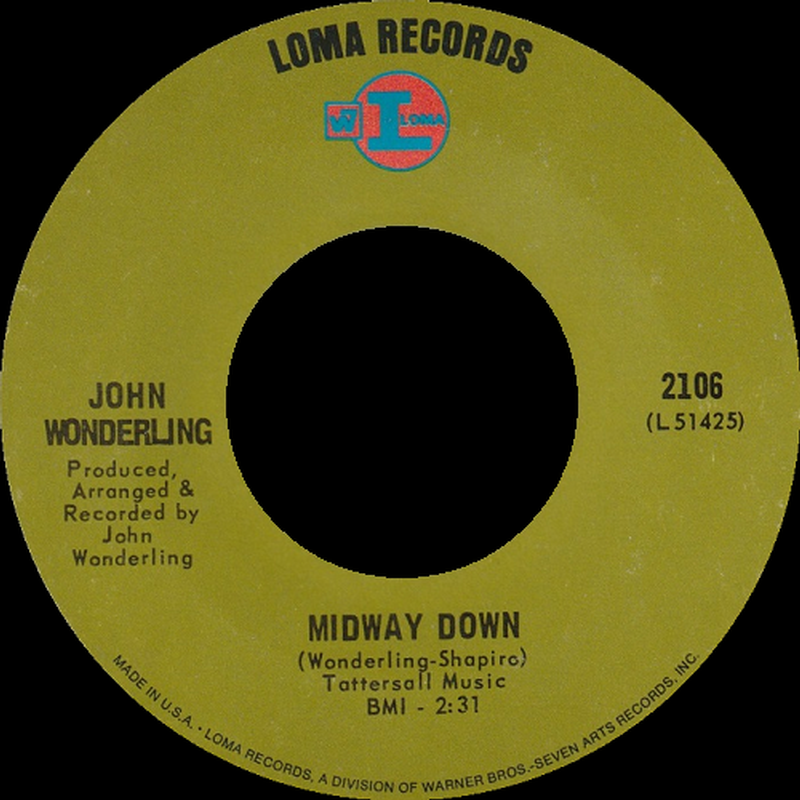 John Wonderling was born in France on February 18, 1945 and relocated with his family to Queens, NY at the age of five. He became interested in music at a young age and began his career at Cameo-Parkway Records in 1965. In 1967, he landed a job with Alouette Productions, an independent New York City music production publishing company best known for signing up the likes of Quincy Jones, Lesley Gore and Janis Ian. At around the same time, he began crafting songs himself, and in April, 1968, the Creation released an outstanding version of his track 'Midway Down' (co-written with Lou Shapiro) in the U.K. and Europe. That September, Wonderling became the first pop artist to sign to the R&B label Loma (a subsidiary of Warner Bros.) where he produced and arranged his own carnivalesque version of the single ('Midway Down' b/w 'Man Of Straw') at the Hit Factory studios in Manhattan. Other notable credits on the record include now legendary engineer and producer Bill Szymczyk (James Gang, Eagles) and an all-star backing band consisting of Hugh McCracken (guitar), Paul Harris (keyboards), Chuck Rainey (bass) and Bernard "Pretty" Purdie (drums).

It didn't take long before Wonderling became studio manager of the aforementioned Hit Factory at a time when the likes of Jimi Hendrix and the James Gang were recording there. Although now primarily working with other more famous artists, Wonderling continued writing for himself and finally issued a solo LP titled Day Breaks in 1973, which was surprisingly promoted very poorly and therefore didn't ever have a chance to sell well. He remained heavily involved in the music industry over the years however, working with notable artists Aaron Neville, Chaka Khan and Pat Benatar until his untimely death of a heart attack in 2003.

This compilation CD contains the following songs by this artist that are played on TWOS:
- Midway Down