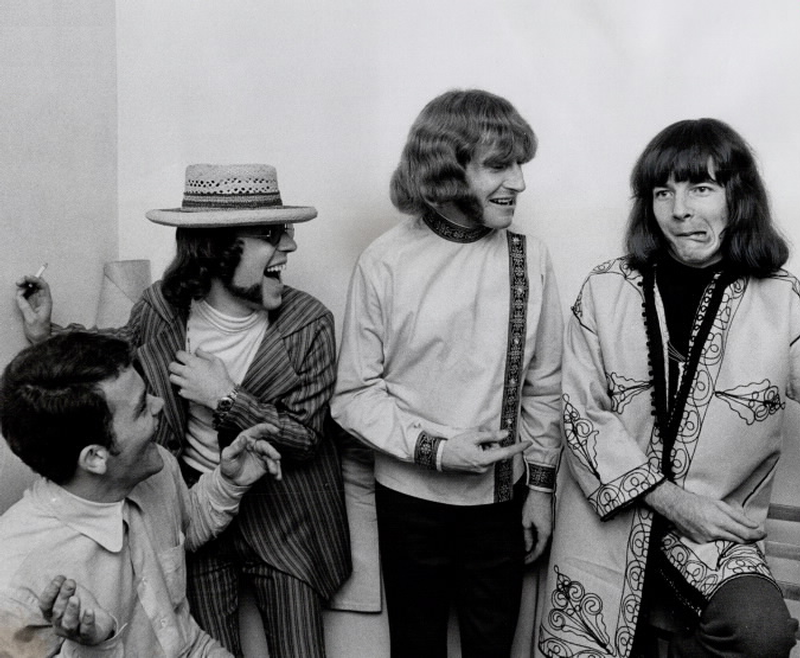 Originally known as the Spats, this Toronto ensemble was formed in 1964 by Ronn "Skip" Prokop (drums, vocals) and Bill Marion (rhythm guitar, lead vocals). Other original members included Chuck Beal (lead guitar, mandolin) and Dennis Gerrard (bass). The band reportedly practiced for over 40 hours a week to sharpen their skills, which made them one of the area's tightest acts. After changing their name to the Paupers in early 1965, the group attracted the attention of local manager Duff Roman, who signed them to the Toronto area independent rocked label, Red Leaf. In March of that year, the label issued Prokop and Marion's 'Never Send You Flowers' as the group's debut single, which soon became a modest local hit, as did the follow-up 'If I Told My Baby'.

During the summer of '65, the band signed a new deal with Duff Roman’s own label, Roman Records, which issued their next single, the outstanding Prokop and Marion penned 'For What I Am'. A cover of 'Long Tall Sally' followed in the spring of 1966, by which point the group had parted with Roman and signed up with fledgling manager Bernie Finkelstein. In the summer of that year, Marion left the fold and was replaced by Scotland native Adam Mitchell (rhythm guitar, mandolin, lead vocals), who quickly asserted himself as the bands new frontman and chief songwriter with Prokop. Finkelstein signed the new lineup to the MGM label shortly afterwards, and they further strengthened their reputation as a solid live act by opening for the Lovin' Spoonful at the Maple Leaf Gardens towards the end of '66.

In early 1967, Bob Dylan's manager Albert Grossman convinced Finkelstein to sell his interests in the group, which after doing so, moved on to manage Kensington Market. Grossman re-negotiated the MGM contract and signed the band to its associate label Verve Forecast. The group's debut single with Mitchell ('If I Call You By Some Name') was then released and reached #31 on Canada's RPM chart. The single was followed by a well-received appearance at New York's Cafe Au Go Go in the spring of 1967 supporting the Jefferson Airplane. They then soon set out for a series of concerts on the U.S. West Coast, including several appearances at San Francisco's Fillmore Auditorium and the Monterey Pop Festival on June 16th. Unfortunately, after having practiced diligently for two weeks in preparation for the once in a lifetime performance, the Monterey show went painfully awry when Beal's amp failed, and to make matters worse, Gerrard reportedly dropped acid before going on stage, which caused him to play completely out of step for the entire set. The following quote sums up the debacle perfectly: "Many of the Monterey acts blew people's minds. The Paupers simply blew it."

The group returned to Toronto in the late summer of 1967 and issued the outstanding single 'Magic People'. An LP of the same title soon followed and includes another excellent song titled 'Simple Dead'. In November, 1967, the album Magic People peaked at #178 in the U.S., but its modest success was overshadowed by Gerrard's departure in early 1968, who was replaced by Brad Campbell (bass, vocals). Around the same time, Peter Sterbach (keyboards) was added for live shows, but quit a month later and was replaced by John Ord (keyboards, vocals). Unfortunately, the group began experiencing heavy conflicts with one another, which lead to them playing their final live dates together at New York City's Electric Circus in the late summer of '68. The band's second album (Ellis Island) was released in the aftermath of the group's breakup and includes a couple of great harder rock tracks in 'South Down Road' and 'Numbers'.

In October 1968, an updated version of the Paupers featuring Mitchell, Beal, Ord, and original bass player Denny Gerrard was formed to pay off their existing debt, with Roz Parks (drums) completing the lineup. Gerrard soon left however followed by Mitchell in the spring of 1969, prompting the remaining members to bring in Northern Ireland native James Houston (guitar, vocals) and Mel O'Brien (bass), and return to the local club scene. Later that year, the Houston led line up returned to the Night Owl for a few shows in early August, but then broke up for good later that month.

For What I Am