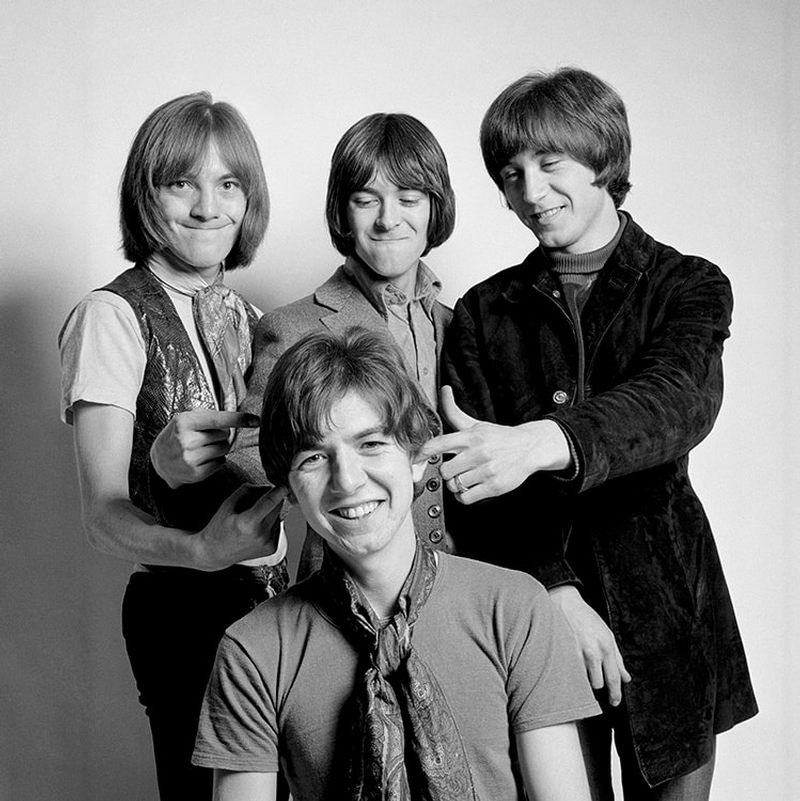 The Small Faces were by far one of the best and most innovative mod bands to come out of Great Britain. In their less than four short years of existence, the group was able to successfully evolve from a more straight forward mid 60s pop act into a uniquely blended soulfully psychedelic sound machine. Their innovative creativity awarded the band many a hit in the U.K. and Europe, but quite surprisingly, a similar level of success eluded them for the most part in the U.S.

The London ensemble formed in June, 1965 when Ronnie "Plonk" Lane (bass, vocals), Kenny Jones (drums) and Jimmy Winston Langwith (keyboards) met up with Steve Marriott (guitar, vocals) while he was working in a Manor Park area music shop. Marriott had previously been a child actor starring in a London production of the play Oliver!, as well as being featured in other British TV and radio shows. He had also already recorded a solo single on the Decca label in the spring of 1963. The foursome hit it off and began cutting their chops in Winston's father's pub called the Ruskin Arms, belting out their favorite R&B numbers. Their name came from the fact they were all of relatively small stature and were “Faces” in the mod sense at the time of being "Mister Cool". It wasn’t too long before the band began getting higher profile club gigs, taking the East End of London by storm.

The group was soon brought to the attention of manager Don Arden who took them under his wing, quickly getting them signed to the Decca label. They issued their first single ('Whatcha Gonna Do About It') after only being together for less than a few months, which became a hit reaching #14 on the U.K. pop charts. A follow up single (the awesome 'I've Got Mine') then followed in late 1965, which was featured along with the band in the movie Dateline Diamonds; however, it still failed to chart by a narrow margin due to a delay in the film's release. Soon after the record was released, Winston left the fold for a solo career and was replaced by Ian McLagan (keyboards).

In early 1966, the band saw renewed success with their third single ('Sha-La-La-La-Lee'), which became a big hit peaking at #3 on the U.K. charts. This prompted the release of a debut, self-titled LP, which also sold very well, staying on the album charts for many weeks and also peaking at #3. They rapidly rose in popularity with each chart success, becoming regulars on British pop TV shows such as Ready Steady Go! and Top of the Pops, and toured incessantly in the U.K. and Europe. They also built up a substantially large fan base in London with a residency at the Cavern Club off Leicester Square in the West End. Their popularity hit a high note in August, 1966 when their fifth single (the groundbreaking 'All Or Nothing') rocketed to the #1 spot on the U.K. charts. The band was primed and ready to tour the U.S., hosted by the heavy acts the Mama's & The Papas and Lovin' Spoonful, but it had to be cancelled when it became known that McLagan had at one time been convicted of drug possession, which prevented him from entering the country. This is by all accounts the most significant reason the band never hit it that big in the States.

By the end of 1966, despite being one of the highest grossing live acts in Great Britain and scoring a slew of successful singles including four U.K. Top 10 hits, financially the band had nothing to show for their efforts. Ardin had taken in most of the group's earnings and on top of that, Decca then prematurely issued a sixth single ('My Mind’s Eye') without their consent, which even though it reached #4 on the U.K. charts, was more or less a demo of a far more polished/finished version. This greatly upset the band, so when their seventh 45 ('I Can't Make It' b/w the loony 'Just Passing') only made it to #26 on the U.K. charts in the spring of 1967, they used it as an opportunity to sever ties with both Decca and Ardin, signing with ex-Rolling Stones manager Andrew Loog Oldham and his newly formed Immediate label. A few months later, Decca issued a final single titled 'Patterns' without the group's consent, which wasn't promoted properly and flopped.

The Small Faces new manager and label gave the band a well-deserved shot in the arm with the June, 1967 release of the single 'Here Comes The Nice'. Despite the tune being about the band's drug dealer and getting high, which Marriott creatively called being in "the nice", the slang evaded the radio sensors and it climbed to #12 on the U.K. charts. Another self-titled LP was also issued in June, which houses some great psychedelic material including 'Green Circles' and 'Up The Wooden Hills To Bedfordshire'. Unauthorized by the band, Decca also issued another LP of earlier recorded material titled From The Beginning that same month, which also includes some solid gems in 'That Man' and 'Yesterday, Today And Tomorrow'. This war of the records ended up being won by Immediate, with their album hitting the #12 spot, while the Decca LP only reached #17.

In August of 1967, the band released the outstanding single 'Ichycoo Park', on which they pioneered the use of phasing. The record deservedly was a another smash for them in the U.K., reaching the #3 spot and also becoming their one and only certifiable hit in the U.S., peaking at #16. To promote the song, the band made a diverse number of live appearances, including the Festival of the Flower Children on the Isle of Man and the Beat Club TV show in Germany, which culminated in Marriott collapsing of nervous exhaustion during a November performance in Ireland. The foursome bounced back a month later however with the incredibly soulful single 'Tin Soldier', featuring P.P. Arnold on backing vocals. This track was also a big smash in the U.K. hitting #9 there, but although respectable, only reached the #73 spot in the U.S. Another four months ticked by until the release of their next awesome 45 (the quirky 'Lazy Sunday' b/w the heavy duty 'Rollin' Over'), with the promo side hitting big again in the U.K. at #2. Both songs on the record also then appeared about six weeks later on their next LP titled Ogden's Nut Gone Flake, which is nothing short of amazing. Not surprisingly, the album topped the U.K. album charts for six weeks and includes a wondrous collection of very well written and highly original psychedelic tracks. The circular album cover depicting the lid of an Ogden's tobacco tin is very original as well.

In the summer of 1968, the group released another 45 ('The Universal' b/w 'Donkey Rides, A Penny A Glass') with the promo side reaching the #16 spot. Marriott also met Peter Frampton around this time who assisted with his and Lane's work with the band Skip Bifferty. Marriott and Lane then returned the favor by assisting Frampton with his group the Herd on their single 'Sunshine Cottage'. In October, 1968, the Small Faces then embarked on a three month, high profile tour of the U.K. along with Joe Cocker and the Who. For some of the dates, Frampton guested on guitar with the band, becoming even closer mates with Marriott. The tour ended at the close of '68 and about two months after that, Marriott decided to leave and form Humble Pie with Frampton, bringing an end to the Small Faces fantastic run.

A final 45 ('Afterglow Of Your Love' b/w 'Wham Bam Thank You Man) was issued in March, 1969 and only hit #36 on the U.K. charts due to the band already being defunct. A final, unauthorized double-LP titled The Autumn Stone was then released in November, containing earlier singles, previously unreleased material, and three live tracks, but as good as it is, it didn't chart at all. An interesting side note to 'Wham Bam Thank You Man' is that it was retitled 'Wham Bam Thank You Mam' for The Autumn Stone album, and is more known for this title now. The demo version of this track is also quite good with a much faster tempo, grittier feel and completely different lyrics.

With Marriott's departure, Lane, Jones and McLagan floundered for a while before joining forces with Ronnie Wood and Rod Stewart (who had both recently parted ways with the Jeff Beck Group) to form the Faces. This band was very successful in its own right and remained active into the mid 70s. Jones would of course later become the drummer for the Who after the death of Keith Moon in 1978, which kept him busy for about 10 years. McLagan would become a successful backing musician playing with Bob Dylan and the Rolling Stones, among several other notable artists. Lane formed the band Slim Chance, which had a few hits in the U.K., but had developed Multiple Sclerosis and eventually passed away from the disease in 1997. After a long and highly successful run with Humble Pie in the early 70s, Marriott was able to get the original Small Faces to reunite briefly in 1975 and then Humble Pie in the late 70s through early 80s. Marriott would later die tragically in a house fire at only age 44 in 1991. All in all, the fabulous Small Faces and its members left an indelible stamp on rock and roll, heavily influencing a countless number of notable artist including the Black Crowes, and were finally inducted into the Rock and Roll Hall of Fame in 2012.

This compilation CD contains the following songs by this artist that are played on TWOS:
- Green Circles

This compilation CD contains the following songs by this artist that are played on TWOS:
- Green Circles
- Tin Soldier

This compilation CD contains the following songs by this artist that are played on TWOS:
- Here Comes The Nice

This compilation CD contains the following songs by this artist that are played on TWOS:
- Understanding

This compilation CD contains the following songs by this artist that are played on TWOS:
- That Man