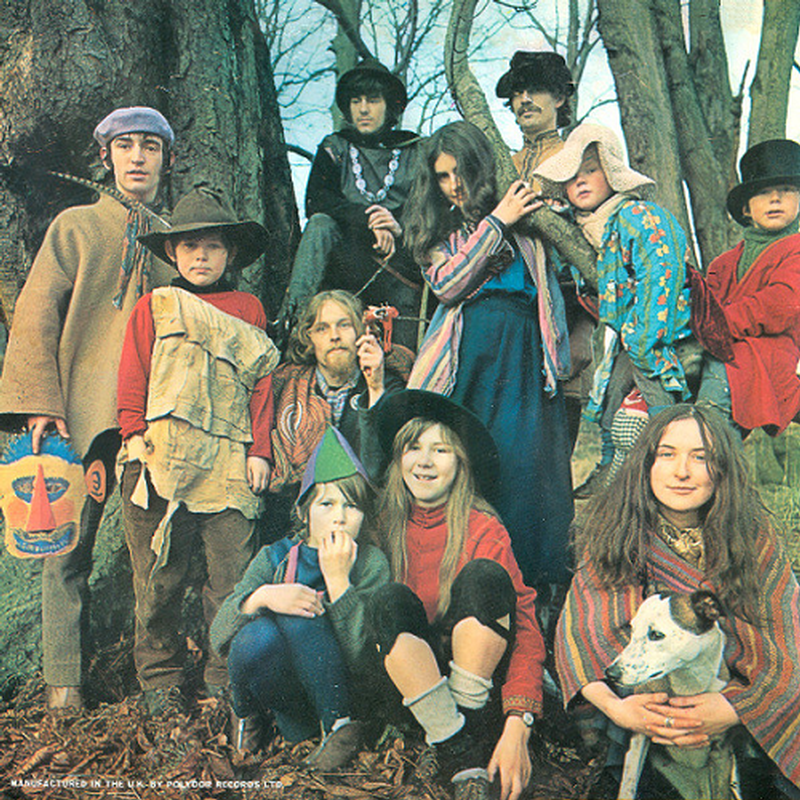 The Incredible String Band (ISB) was a Scottish psychedelic folk ensemble that came together in 1965. The band built a considerable following, especially within the British counterculture throughout their almost decade long career. The members of the group are considered musical pioneers in psych-folk and, by integrating a very wide variety of traditional music forms and instruments, also in the development of world music.

In 1963, acoustic musicians Robin Williamson (guitar, bass, woodwinds, keyboards, vocals) and Clive Palmer (banjo, vocals) began performing together as a traditional folk duo in Edinburgh, particularly at a club ran by Archie Fisher in the Crown Bar, which also regularly featured Bert Jansch of future Pentangle fame. It was there that they were discovered in August, 1965 by Joe Boyd, then working as a talent scout for the influential folk-based Elektra label. Later in the year, the duo decided to fill out their sound by adding a third member, initially to play rhythm guitar. After an audition, local rock musician Mike Heron (guitar, sitar, keyboards, percussion, vocals) won the slot and the trio christened themselves the Incredible String Band. In early 1966, Palmer began running an all-night folk venue named Clive's Incredible Folk Club in Glasgow where ISB became the house band. When Boyd was promoted to head of Elektra's London office, he signed ISB up for a debut album, heading off a rival bid from Transatlantic Records.

In May, 1966, ISB recorded their debut, self-titled LP at the Sound Techniques studio in London. It was issued in both the U.K. and U.S. and consists mostly of self-penned material in solo, duo and trio formats, showcasing their ability to play on a large variety of non-conventional instruments. It won the title of "Folk Album of the Year" in Melody Maker's annual poll, and in a 1968 Sing Out! journal interview, Bob Dylan praised the album's track 'October Song' as one of his favorite songs of that period. The trio surprisingly broke up shortly after the album's release when Palmer left via the hippie trail for Afghanistan and India, and Williamson journeyed to Morocco with no firm plans to return. Heron stayed in Edinburgh, playing with a band called Rock Bottom & The Deadbeats; however, when Williamson returned after running out of money, laden with Moroccan instruments, he and Heron decided to reform ISB as a duo.

In late 1966, Heron and Williamson embarked on a short U.K. tour, supporting Tom Paxton and Judy Collins. In early 1967, they performed regularly at various London clubs, including Les Cousins. Also around this time, Joe Boyd became the group's manager as well as producer, and secured them a spot at the Newport Folk Festival on a bill with Joni Mitchell and Leonard Cohen.

The duo always elected to write there songs independently, rather than collaborating with each other. Boyd wrote: "Mike and Robin were Clive's friends rather than each other's. Without him as a buffer, they developed a robust dislike for one another. Fortunately, the quality and quantity of their songwriting was roughly equal. Neither would agree to the inclusion of a new song by the other unless he could impose himself on it by arranging the instruments and working out all the harmonies."

In the summer of 1967, ISB released their second LP titled The 5000 Spirits Or The Layers Of The Onion, accompanied by Pentangle's Danny Thompson on double bass and new members (and girlfriends of Heron and Williamson) Christina "Licorice" McKechnie (keyboards, drums, percussion, vocals) and Rose Simpson (bass, violin, percussion, tabla, vocals). This album demonstrates considerable musical development from their previous work, as well as a more unified sound. It also further displays each of the members abilities as multi-instrumentalists and singer-songwriters, earning them much wider critical acclaim. Enthusiastic reviews in the music press were accompanied by high profile appearances at venues such as London's UFO (co-owned by Boyd), the Speakeasy, and Queen Elizabeth Hall. They also gained further exposure on John Peel's Perfumed Garden radio show, and later on BBC's Top Gear, which made them favorites with a growing British underground audience. The record shot to #1 on the U.K. folk charts and was named by Paul McCartney of The Beatles as one of his favorite records of that year.

1968 saw the band reach an apex with the release of their third LP titled The Hangman's Beautiful Daughter. This album reached the #5 spot on the U.K. album charts shortly after its release and was also nominated for a Grammy Award in the U.S. Robert Plant also later said that Led Zeppelin's first LP was heavily influenced by "Hangman". A departure from the band's previous releases, this record leans heavily on a more layered production, with imaginative use of then state-of-the-art multi-track recording techniques. The album also features a series of vividly dreamlike Williamson tracks, such as 'The Minotaur's Song', a surreal parody told from the perspective of the mythical beast.

By early 1968, the group was capable of filling major venues in the U.K. They left behind their folk club origins and embarked on a nationwide tour, including a critically acclaimed appearance at the London Royal Festival Hall. Later in the year, they performed at Royal Albert Hall, at open-air festivals, and in the U.S. at the prestigious Fillmore auditoriums in San Francisco and New York City. After their appearance at the Fillmore East in New York, they were introduced to the practice of Scientology by David Simons (aka "Rex Rakish", once of Jim Kweskin's Jug Band). Joe Boyd, in his book White Bicycles: Making Music in the 1960s, describes how he was inadvertently responsible for their "conversion" when he introduced the band to Simons who, having become a Scientologist, persuaded them to enroll in his absence. The band's support of Scientology over the next few years was controversial among some fans and appears to coincide with what many view as the beginning of a decline in the quality of their work. In an interview with Oz magazine in 1969, the band spoke enthusiastically of their involvement with Scientology, although the question of its effect on their later albums has provoked much discussion ever since.

Their fourth LP (Wee Tam And The Big Huge) was issued in late 1968 and is considered to be musically less experimental and lush than "Hangman", but conceptually even more avant-garde, a full-on engagement with the themes of mythology, religion, awareness and identity. Williamson's otherworldly songs and vision dominate the album, though Heron's more grounded tracks are also among his very best, and the contrast between the two perspectives gives the record its uniquely dynamic interplay between a sensual experience of life and a quest for metaphysical meaning. The record was released as a double album and also simultaneously as two separate LPs, a strategy that lessened its impact on the charts, but is nonetheless still considered their best work by most hardcore ISB fans.

The band toured extensively for much of 1969 in both the U.K. and U.S. In August of that year they played Woodstock later than planned, having refused to perform in the pouring rain on the opening evening. As a result, ISB wasn't included in the iconic movie documenting the festival; their performance was re-scheduled, and they did not go down well with the crowd, which was used to the more hard-hitting psychedelic rock of bands like Canned Heat who had preceded them earlier that day. In late 1969, they released the LP Changing Horses, which was generally seen as a disappointment when compared to their earlier works. By late '69, they had also established a communal base at Glen Row near Innerleithen.

In April, 1970, ISB released their sixth LP titled I Looked Up, and by this time, their live performances had become more theatrical. In addition to the spectacle of their exotic instruments and colorful stage costumes, their concerts frequently featured poems, surreal sketches and dancers. Later in the year, Williamson (with little input from Heron) attempted to fuse the music with his theatrical fantasies in a quixotic multi-media spectacular at London's Roundhouse, naming it simply "U", which he envisioned as "a surreal parable in dance and song". It combined the band's music with dancing by the Stone Monkey troupe with the letter "U" representing a transition from a high level of spiritual awareness to a low, then returning to a final peak of awareness and communication. Although ambitious, its reception was mixed, with some harsh reviews from critics who had in some cases acclaimed their earlier work. It was also received poorly in New York City, a planned U.S. tour of "U" having to be cancelled after a few performances at the Fillmore East, with Joe Boyd describing the show as "a disaster".

In 1970, Boyd, whose skillful handling of the band had contributed to much of their international success, ceased managing them and returned to the U.S. The group then left Elektra and signed with Island Records, for which they recorded another five LPs. The first was a soundtrack to the film Be Glad..., followed by the eclectic Liquid Acrobat As Regards The Air, which was received quite well.

The band continued to tour and record throughout the early 1970s. Simpson left in 1971, and was replaced by Malcolm LeMaistre (bass, keyboards, percussion, vocals) who was formerly of the Stone Monkey troupe. Heron then took some time out to record a well-received solo album (Smiling Men With Bad Reputations), which in contrast to the ISB's self contained productions, features a host of session guests, including Pete Townshend and Keith Moon of Who, Ronnie Lane of the Small Faces, John Cale of the Velvet Underground and Richard Thompson of Fairport Convention. The following year, McKechnie left and was replaced by Gerard Dott (clarinet, saxophone, keyboards, vibraphone), an Edinburgh jazz musician and friend of both Heron and Williamson who had contributed to "Smiling Men". Williamson also recorded a solo album (Myrrh) around this time, which features some of his most extraordinary vocal performances.

The group's lineup then changed again with the addition of Stan Schnier aka "Stan Lee" (bass), Jack Ingram (drums) and Graham Forbes (electric guitar), reflecting the move towards a more conventional, amplified rock group. Their final albums for Island were poorly received, prompting the label to drop them in 1974. By then, disagreements between Williamson and Heron about musical direction had become unbearable, prompting their split up in October, 1974.