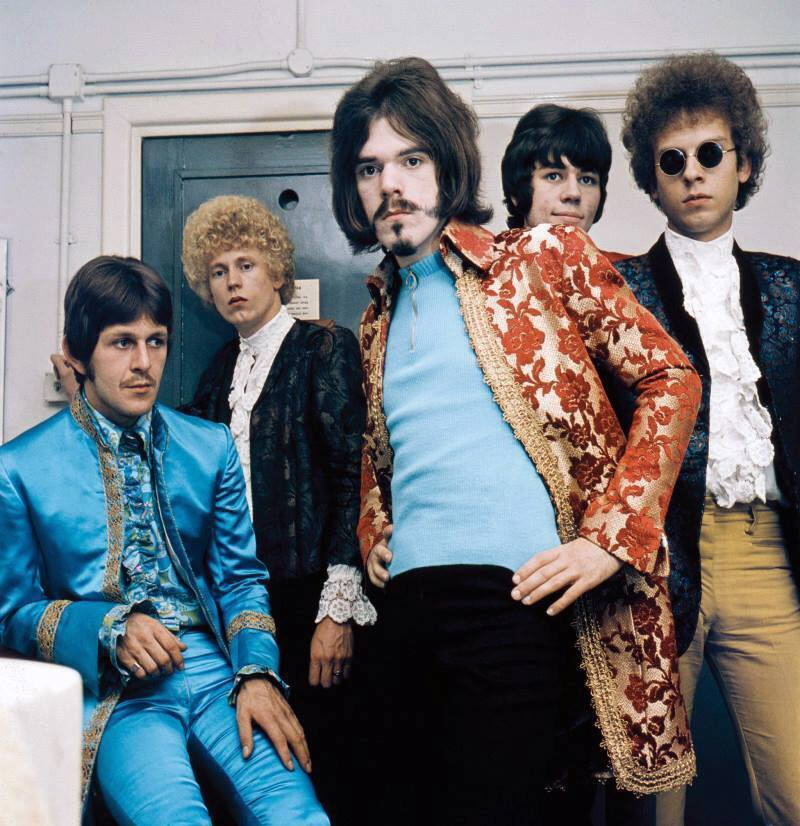 The Move was a pop-psych band from Birmingham that formed in late 1965 with original members Roy Wood (guitar, vocals), Ace Kefford (bass, vocals), Bev Bevan (drums), Trevor Burton (guitar, vocals) and Carl Wayne (lead vocals). They were hugely popular in the U.K., scoring nine Top 20 hits there, but had a hard time finding any substantial success across the pond in the U.S. All of the members were from very well respected Birmingham bands (a local supergroup if you will) and their name referred to "the move" the various members made to form the group. They started playing live in early 1966 and it wasn't long before Moody Blues manager Tony Secunda offered to take them under his wing. Secunda soon got them a weekly residency at London's Marquee Club in 1966, where they appeared dressed in gangster regalia. Their early career was marked by a series of publicity stunts, high profile media events and outrageous stage antics masterminded by Secunda, which included Wayne taking an ax to television sets.

Eventually Secunda managed to persuade Wood to begin writing songs for the group and they secured a production contract with independent record producer Denny Cordell at Deram, but that was even turned into a media sideshow by Secunda, who arranged for the band to sign their contracts on the back of Liz Wilson, a topless female model. Wood wrote their first single, the outstanding 'Night Of Fear' that became a #2 hit on the U.K. Singles Chart in early 1967. Their second single, 'I Can Hear The Grass Grow' (a pop-psych song referring to the hallucinogenic effects of LSD), was also a huge success, reaching #5 in the U.K.

A third single ('Flowers In The Rain') hit #2 on the U.K. charts and achieved its own place in pop history by being the first chart single to be played on Radio 1 when the station was launched in 1967. The promotional campaign for the single led to litigation that had serious repercussions for Wood and the group. Without consulting the band, Secunda produced a promotional cartoon postcard showing the Prime Minister of the U.K., Harold Wilson, in bed with his secretary, Marcia Williams. Wilson sued the Move for libel and they ended up having to pay all court costs, and all royalties earned by the song, which otherwise would have belonged to Wood as composer, were awarded to charities of Wilson's choice. As a direct consequence of the lawsuit, The Move fired Secunda and hired Don Arden, who had himself been recently fired as manager of the Small Faces.

Starting in November of 1967, the group took part in a package tour around the U.K., playing two shows a night over sixteen days, as part of an all-star bill that included the Jimi Hendrix Experience, Pink Floyd, the Nice, Eire Apparent, the Outer Limits, Amen Corner and the then BBC Radio 1 DJ, Pete Drummond. In March 1968, the Move returned to the charts with 'Fire Brigade', reaching #3 in the U.K. and the first single on which Wood sang lead vocal, causing tension between him and Wayne. A few weeks later, around the time of their self-titled debut LP's release (which includes an outstanding cover of Moby Grape's 'Hey Grandma'), Kefford was let go due to increasing personal problems, escalated by drug usage. He went on to form his own short-lived group, the Ace Kefford Stand, with Cozy Powell on drums. After this, he pursued a solo career and the Move became a four-piece, in which Burton and occasionally Wayne took turns on bass. It was also during this lineup shift that the band first invited Jeff Lynne, a friend of Wood's, to join. He turned them down at the time, as he was still working toward success in the Idle Race, another Birmingham based group.

In mid 1968, their fifth single 'Wild Tiger Woman', a song acknowledging the group's admiration for Jimi Hendrix, (Wood and Burton sang backing vocals on 'You Got Me Floatin'', which can be found on the Jimi Hendrix Experience's LP Axis: Bold As Love), sold poorly and failed to make the U.K. charts. The group responded with their most commercial song to date ('Blackberry Way'), which topped the U.K. charts in February, 1969. Richard Tandy played keyboards on the single and joined the band for a time, playing keyboards live, and switching to bass when Burton was briefly sidelined with a shoulder injury. Upon Burton's recovery, Tandy departed to join the Uglys. The new, more pop-oriented musical direction, and the single hitting #1 was the last straw for the increasingly disenchanted Burton, who wanted to work in a more hard rock and blues-oriented style, so he ended up leaving the group in early 1969 after an altercation on stage with Bevan in Sweden. Burton was ultimately replaced later that year by Rick Price (bass, guitar, vocals), another veteran of several Birmingham rock groups.

In the fall of 1969, the band made their only concert appearances in the U.S. with two opening shows for the Stooges in Detroit, and dates in Los Angeles and at the Fillmore West in San Francisco. When neither their U.S. record company nor promoters showed any more interest (the band even had to make their own accommodations and travel arrangements) the remaining proposed tour dates in New York were cancelled and the group returned home. During that period, Arden sold the Move's management contract to impresario Peter Walsh, who was also managing the Marmalade. Walsh, who specialized in cabaret acts, began booking the band into cabaret-style venues, which further increased the tension between Wayne and Wood. Wayne then proposed a plan to revive the Move by bringing back Burton and Kefford, and suggested to Wood that he focus on and perform solely in a new orchestral rock project he was brainstorming (which would eventually become the Electric Light Orchestra) but still write songs for the Move. This suggestion was flatly rejected by Wood, Bevan and Price, so Wayne finally left the fold in January 1970. At this time, the band jettisoned Walsh as manager and returned to Arden.

A second LP (Shazam) was finally issued in early 1970, but it sold poorly. Wood realized a new direction for the band was needed so he finally enticed Jeff Lynn (guitar, vocals, keyboards, bass) to join, who was excited by Wood's orchestral rock concept. A third LP (Looking On) was issued in the fall of 1970, with five songs composed by Wood and two by Lynn. One of the songs on the album written by Wood ('Brontosaurus') hit #7 in the U.K., but it's Lynn's 'What?' that really jumps off the record. During the lengthy recording sessions for this album, which included continuous overdubbing of new instruments by Wood and Lynne, Price quit after feeling left out of the proceedings in the studio. The remaining three members had intended Looking On to be the final Move album, but the record deal for Electric Light Orchestra (ELO) with Harvest Records included a request from the label for their own Move album, presumably to help recoup a £25,000 advance ELO had been given. This meant that the new project would have to be put on hold for a year. The members recorded both the Move's last album (Messages From The Country), and ELO's self-titled debut at the same time, even during the same recording sessions. "Messages" was issued in the fall of 1971, while ELO's debut was released a few months later just before Christmas. In 1972, after ELO was in full swing, the Move released what turned out to be a farewell disc, a maxi single consisting of 'California Man' (a #7 U.K. hit), 'Ella James' and 'Do Ya'. Ironically, ELO was initially more successful in the United States, billed as "the English guys with the big fiddles", which had always alluded the Move.