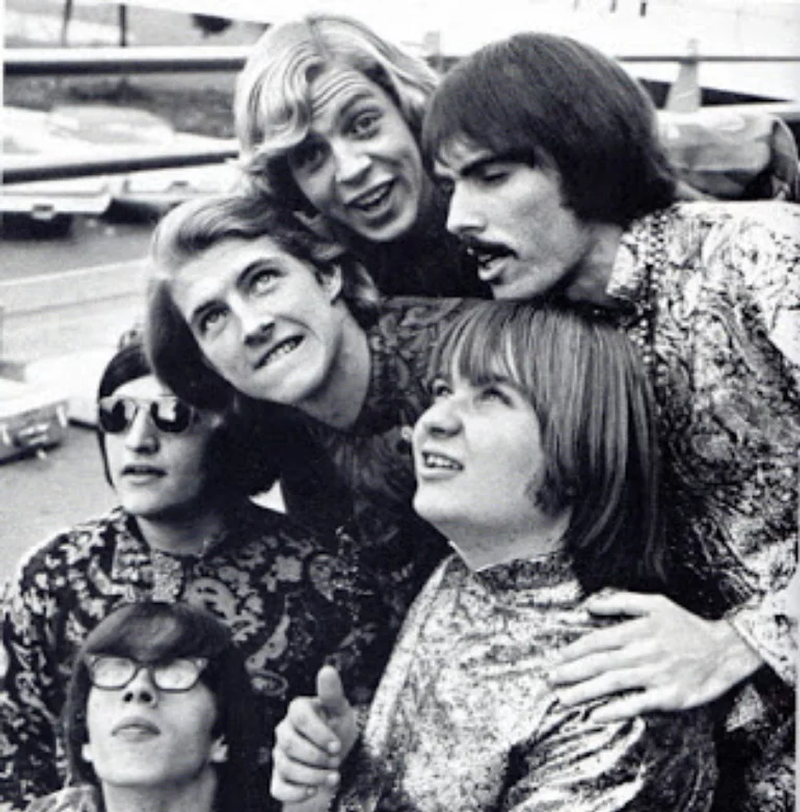 Although now widely considered as a borderline psychsploitative, one hit wonder act that had a 1967 #1 smash with 'Incense And Peppermints', few realize that the Strawberry Alarm Clock (SAC for short) in fact has included some truly great musicians and songwriters that were able to lay down a slew of outstanding tracks throughout their original mid to late 60s tenure. Their hippie trippy name alone fantastically encapsulates the sometimes over the top L.A. psychedelic music scene, which was responsible for churning out some of the most well produced and put together material of the era.

Originally forming in 1965 as Thee Sixpence, the band hailed from Glendale, CA and began issuing singles on the Hollywood based All-American label the following year. Original members were Ed King (lead guitar, vocals), Lee Freeman (rhythm guitar, sitar, harmonica, vocals), Michael Luciano (vocals), Gary Lovetro (bass, vocals), Steve Rabe (guitar, vocals) and Gene Gunnels (drums). In the spring of 1967, Gunnels, Rabe and Luciano were replaced by former Waterfyrd Traene members Randy Seol (drums, bongos, vibes, vocals) and Mark Weitz (keyboards, harpsichord, vocals), and with this lineup, a fifth 45 was released in the spring of 1967, which includes the breakout track 'Incense And Peppermints' (initially misspelled "Incense And Pepermints") tucked away on the B-side. Very shortly thereafter, the group added a sixth member in George Bunnell (bass, vocals) and changed their name to the Strawberry Alarm Clock, which originated from the combination of The Beatles recently released 'Strawberry Fields Forever' single, along with a clock that was ticking in the background of the room that they were working in to come up with a new moniker. It wasn't long after that they signed to the Uni label and reissued 'Incense And Peppermints' as a nationally distributed single where it belonged. This well-deserved exposure catapulted the track to the top position on the charts where it went gold, selling well over a million copies. It should be noted that the song is credited to Tim Gilbert of the Rainy Daze and writer-producer John Carter, but according to the group was built on an instrumental by Weitz with a bridge by King. It should also be noted that the lead vocals were sung by a non-member named Greg Munford, a 16 year old friend of the band who was a part of another area group called the Shapes Of Sound.

The summer of 1967 saw SAC at the height of their popularity, frequently playing to larger venues and sharing the stage with the likes of the Jimi Hendrix Experience, Beach Boys and Buffalo Springfield. In their early days of touring, the outfit would often sit on "magic carpets" as their roadies carried them to the stage, while Seol would rig up gas jets on his wrists to give the illusion that he was playing the bongos and vibes with his hands on fire. By the fall of 1967, the band had brought in uncredited member Steve Bartek (flute, guitar) and then issued their debut LP, also titled Incense And Peppermints to capitalize on the hit single. This strategy worked as the album sold rather well, reaching the #11 spot on the charts. As time went by, Lovetro became less involved with playing in the band, first moving to road manager and then exiting for good prior to the release of their second LP (Wake Up…It's Tomorrow) in the spring of 1968. The record was timed with the opening of the movie Psych-Out, which features a Storybook cover of their 'Pretty Song From Psych-Out' during the opening credits, and later SAC playing 'Rainy Day Mushroom Pillow' at the Venice Cheetah Club. It should also be noted that the album track 'Tomorrow' became their only other Top 40 hit, reaching the #23 position on the Billboard Hot 100. In TWOS' opinion, this record is significantly better than their first effort and includes the outstanding "Black Butter" trilogy along with 'They Saw The Fat One Coming', which playfully makes fun of King's weight problem.

In late 1968, the group issued a third LP titled The World In A Sea Shell, but before it could hit the shelves, Bunnell, Seol and Bartek split due to disagreements with their manager Bill Holmes' handling of business affairs, and were replaced by Marty Katon (drums, vocals) and former Nightcrawlers member Jimmy Pitman (guitar, vocals), with King taking on bass responsibilities. The band also canned Holmes who retaliated by forming an alternate version of SAC with Bunnell and Seol, which started touring at the same time as the real band. SAC then countered with an injunction against Holmes, but a significant amount of damage had already been done when the lawsuits caused extreme confusion for promoters who became afraid of booking either group. In early 1969, former Thee Sixpence member Gene Gunnels returned on drums, replacing Katon as the ensemble began taking on a harder, blues-rock sound. It was this lineup that issued the LP Good Morning Starshine that summer, which includes the standout track 'Write Your Name In Gold'. Unfortunately the album didn't sell that well prompting Pitman to leave, being replaced by Paul Marshall (guitar, vocals).

In 1970, the group made a swanky appearance in the psychsploitation movie Beyond the Valley of the Dolls, playing at one of the wildest party scenes ever put on film. One of the songs featured is the outstanding 'I'm Coming Home', but by this time the band had pretty much run its course. They did however continue to tour around the southeastern U.S. into 1971 with Lynyrd Skynyrd opening up for a lot of their gigs. By the end of the year however, SAC found themselves without a record contract and finally decided to call it quits, with King joining Lynyrd Skynyrd in 1972. Several reunions have taken place over the years with various original members, including the release of a new studio LP in 2012, and they continue to perform around the southern California area to this day.

The World In A Sea Shell

This compilation CD contains the following songs by this artist that are played on TWOS:
- Black Butter Present