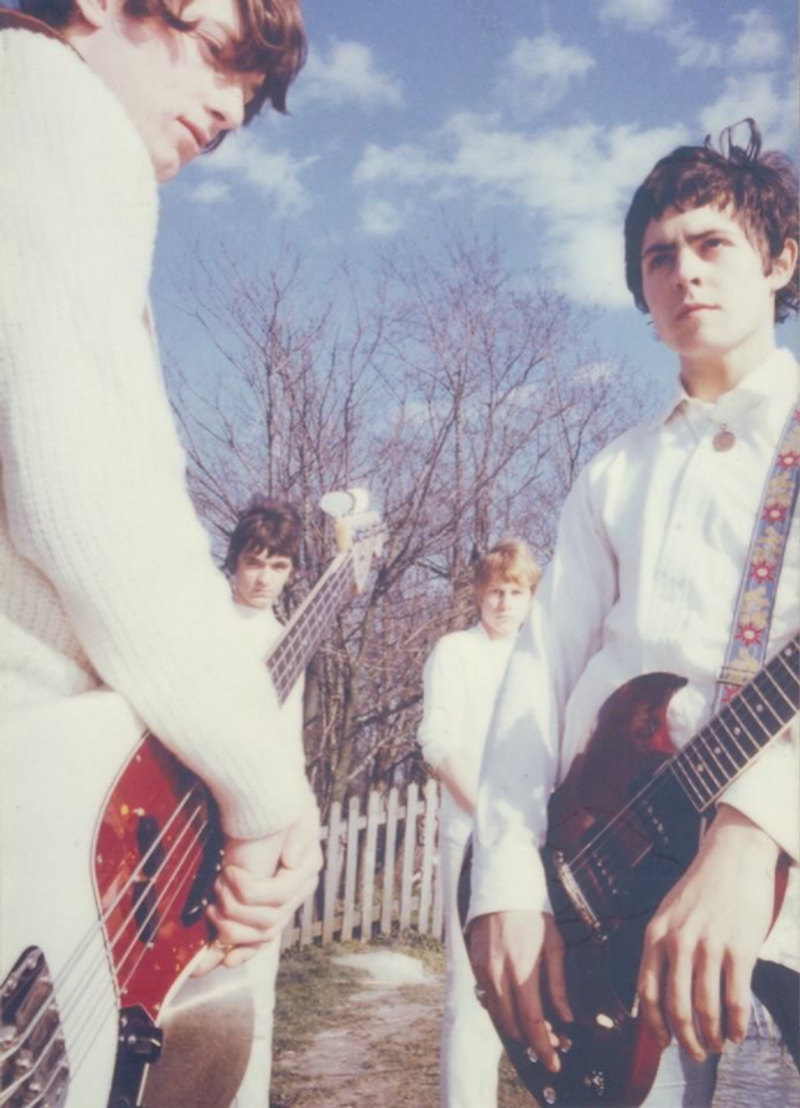 John's Children is best known for briefly including guitarist, singer and songwriter Marc Bolan of Tyrannosaurus Rex and T-Rex fame. The group's genesis can be traced way back to 1963 and a chance meeting between art student Chris Townson (drums, guitar) and Geoff McClelland (guitar) at the home of one of Chris' art school teachers in the small village of Fetcham, England, a southeastern suburb of London. Chris originally fancied himself as a guitar player, but quickly picked up the drums for a chance to play with Geoff's group that was then calling themselves the Clockwork Onions (a very avant-garde name for the time). Chris had previously known Andy Ellison (lead vocals) from a boarding school they both attended and invited him to play harmonica for their first gig at the Fetcham Village Hall. Louis Grooner, another school pal of Chris and Andy's, was the original singer of the group, but surprisingly ran off the stage during their debut set to chase after his girlfriend who was talking to another guy during the performance. This odd happenstance gave Andy the impromptu opportunity to take over on lead vocals, which worked out well and got him a permanent spot in the band. The bass player of the group at this time was Chris Dawsett, the son of the above mentioned art teacher who's house Chris and Jeff had met in.

In 1964, the fledgling ensemble continued to practice and play small gigs around the area. It was also at this time that they went through some name changes (including the Few) until finally settling on the Silence, which Andy coined as a joke because of their tendency to play very loud. Dawsett soon left the band and was replaced by John Hewlett (bass, guitar). The group developed a strong local following and secured a weekly Friday night spot at a venue called the Chuck Wagon (which they would later purchase) in the center of Leatherhead. They began writing their own songs and to no surprise were heavily influenced by the Pretty Things, Rolling Stones and Kinks to name a few.

By 1965, the London scene began to take notice of the group when they were approached by the infamous Don Arden, who was managing the Small Faces at the time. Although longing for an opportunity like this, the band smartly declined his offer, having been creeped out by his rough demeanor. They later learned this to be a good move on their part after discovering that his actual intention was to break them up to keep them from competing with the Small Faces. A real break did come soon enough however, after Hewlett met ex-Yardbirds manager Simon Napier-Bell by chance in a club during a trip to St. Tropez, France. Napier-Bell immediately took a shine to John and agreed to hear his band upon returing to England.

Napier-Bell made good on his promise and in mid 1966 watched them play poolside at the Burford Bridge Hotel in Surrey. He was so shocked by their outlandish performance that he declared the Silence to be the worst band he had ever seen, "I'll sign you!". Although Napier-Bell was obviously unimpressed with the group's musicianship to say the least, he liked their appearance and wild stage antics, and decided to take them under his wing. One of the first things he did was to change their name to John's Children (after bassist John Hewlett). The next thing to come was a record deal with Columbia and in October, 1966, the band's debut 45 ('Smashed Blocked' b/w 'Strange Affair') was issued. The record was actually cut by Los Angeles studio musicians and the only member of the band to appear on the single was Andy Ellison. In the U.S., the single hit #98 on the Billboard Hot 100 and prompted the band's American label (White Whale) to request more songs by the band in the hope of issuing an LP.

In early 1967, the band went into the studio and recorded what they considered to be their ten best tracks for inclusion on a full length album. Simon Napier-Bell decided it would be a good idea to overdub hysterical audience screams over the whole record to give it a "live" sound and make Americans think the band was really big in England, which he did (the screams were actually lifted straight out of The Beatles' movie 'A Hard Day's Night'). He also decided to title the album Orgasm (to describe the "excitement" of the LP) and put a picture of a young lady quite possibly having one on the sleeve, which was then flyposted across the U.S., attracting advance orders of 35,000 copies! In the end though, the title and the sleeve got the album banned in the States and the release was cancelled. The LP was eventually issued by White Whale in 1970, but by that time the band had long been broken up.

Columbia put out a second 45 in February, 1967 ('Just What You Want, Just What You'll Get' b/w 'But She's Mine') with the A-side again being recorded by session men. The flip side however allowed the band to let loose and featured none other than Jeff Beck of the Yardbirds performing the guitar solo. In the spring of 1967, Napier-Bell and the group decided that McClelland wasn't working out so he was fired and replaced by then struggling solo artist Marc Bolan (guitar, vocals). This would strike the beginning of the band's most creative and fruitful phase of their career.

With Bolan on board, the group purchased the old Chuck Wagon club (now called the Bluesette) in Leatherhead and appropriately renamed it the John's Children club. It was there that they practiced, played gigs and featured other London area psychedelic bands like Tomorrow and the Action. In April 1967, they switched record labels, signing to Track, and went on tour briefly with the Who in Germany, but were soon kicked off due to their sloppy playing and over-the-top stage antics (including fake fighting and stage blood), which eventually caused a small riot to ensue. Returning to England, they then played the well known 14 Hour Technicolor Dream event.

Their third 45 ('Desdemona' b/w 'Remember Thomas A. Becket'), was issued in May, 1967 on Track and features the outstanding Bolan penned A-side. The single however was banned by the BBC due to the lyrics "lift up your skirt and fly", so it never became a national hit. Around this time, Keith Moon of the Who injured himself badly enough to be hospitalized by throwing his drums around onstage and Chris Townson was asked to fill in for him on four dates. Halfway through the first gig, Pete Townshend introduced Chris to the audience and there was a tremendous roar of applause because 'Desdemona' was number two on the local chart and the crowd knew full well who Chris was! At the end of the last gig, the Who literally blew Chris off the stage with flash powder in revenge for the John's Children's reckless behavior on the aforementioned German tour. After that experience Chris always said that going back to John's Children after playing with the Who was a bit depressing.

In mid May of 1967, Marc Bolan made his last appearance with the band at the John's Children club. Also in May, the band recorded their next single ('Midsummer Night's Scene' b/w 'Sara Crazy Child'), which was readied for a July release. The band and Bolan in particular were not satisfied with the sound, so only a few dozen copies were ever pressed and only distributed to fans at the John's Children club. Today, this 45 is one of the most sought after records of its era and is worth thousands of pounds. After this debacle, Bolan decided, in Andy's words, that "an acoustic guitar and a set of bongos might be a safer bet", so he put together the psychedelic/acoustic/hippie duo Tyrannosaurus Rex and exited John's Children.

After Bolan's departure, the group briefly remained a trio, issuing a fifth single ('Come And Play With Me In The Garden' b/w 'Sara Crazy Child') in August, 1967. Chris Colville (drums), who managed the John's Children club, was then brought into the band as a full-fledged member and Chris Townson switched from drums to guitar to fill Bolan's spot. The group then departed for a second tour of Germany and appeared on a German TV show billed above the Jimi Hendrix Experience. They were also driven through the streets of Hamburg naked and swamped in flowers in a live re-enactment of the single's German picture sleeve.

A final 45 ('Go Go Girl' b/w 'Jagged Time Lapse') was issued in October, 1967. By this time however, Hewlett and Townson weren't getting along anymore, which prompted the ensemble to split up shortly after its release. Although John's Children never became a particularly famous outfit, their story from start to finish is an interesting one to say the least.

A Strange Affair: The Sixties Recordings

This compilation CD contains the following songs by this artist that are played on TWOS:
- Desdemona
- Midsummer Night's Scene