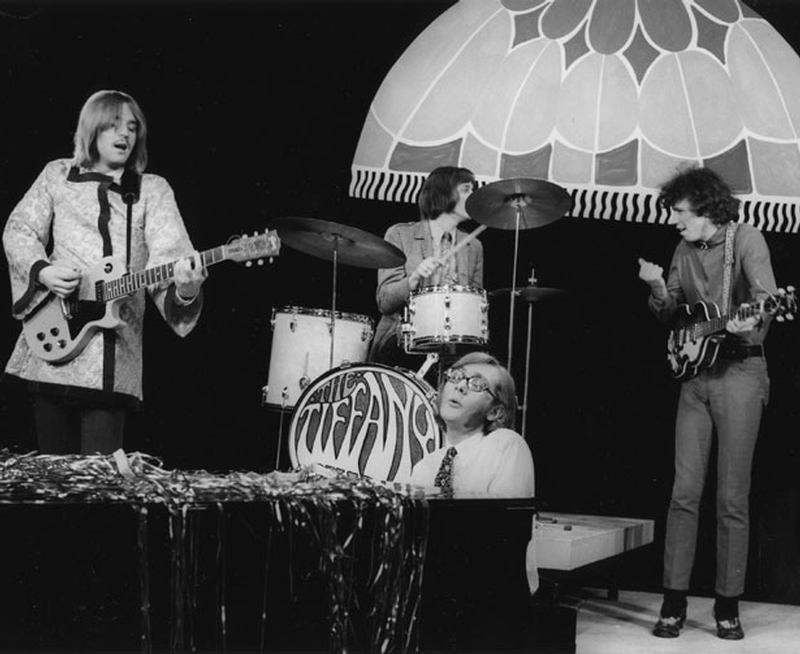 This Cleveland band formed in early 1966 after a chance meeting in a record store. Original members included Barrow Davidian (12-string guitar, autoharp, vocals), Bob Leonard (keyboards, vocals) and Mike Barnes (guitar, vocals). The threesome rehearsed feverishly in Davidian's basement to develop a polished sound and soon recruited Tom Schuster (drums) and Rick Hohn (bass) to make the group a quintet. According to Leonard, the group was named by Davidian while he was looking at a Tiffany lamp shade. Like many other acts of the time, they were heavily influenced by popular British Invasion bands like The Beatles and Rolling Stones, but also mimicked the sound of the Byrds (Davidian’s 12-string guitar was well suited for this).

After a few months of rehearsing, the band began to cut their teeth playing gigs at local high school dances, teen fairs and union parties. The group then successfully auditioned for and appeared on the Cleveland teen dance TV show Upbeat, which featured major acts (The Beatles, Van Morrison and James Brown to name a few) as well as up and coming local bands. Soon after, the group caught the ear of John Thornbury who managed a popular local nightclub called Otto's Grotto, which was nestled in the basement of the posh Statler Hilton hotel in downtown Cleveland. Thornbury promptly set the band up with a six month residency there and Tiffany Shade soon became the hottest band in the area. At this time, they were still playing mostly covers, but also began working in original tunes that would later appear on their album. Schuster remembers nights at the Grotto when acts like "the Who and members of the Jimi Hendrix Experience (Mitch Mitchell and Noel Redding) stopped in when we were playing. It was a happening scene".

In late 1966, after playing several months in Cleveland, the band took an unlikely trip up to Vermont to play the ski resorts there. This bizarre turn of events transpired through a connection that Thornbury had with the owner of a bar in Vermont called the Blue Tooth. Unfortunately Hohn was unable to take the trip because he was only a junior in High School, so the group recruited Bob Ruzga (bass) for the journey. All members enjoyed the change of scenery and had a ball playing in the rural ski town setting, except for Davidian who much preferred the city life. This difference in taste created an unfixable fissure between him and the rest of the band, and he eventually left the fold upon their return to Cleveland. Rugza also didn't last and the band soon found themselves in search of a new bassist.

After an unsuccessful journey to Montreal, Canada to find a new bass man, Leonard, Barnes and Schuster recruited Rhode Island native Robb Clarke Murphy (bass, vocals), who they had met up in Vermont. After returning to Cleveland, the foursome rented a communal house on Murray Hill in the city's historic Little Italy district. According to Leonard, "That house was a very happening place. One night the owner of La Cave, (a Cleveland nightclub where the band also played) brought Chris Wood and Jim Capaldi of Traffic over to the house to hang out and party. On another occasion Canned Heat stayed with us for about a week". Murphy recalls that, "the house on Murray Hill was linked to the owner of LaCave in some way. In exchange for our staying there, we were to let whoever played at LaCave stay with us. I remember Mick Waller and Ronnie Wood stayed at our place as they passed through town with the Jeff Beck Group".

In the fall of 1967, Tiffany Shade cut a record deal with Mainstream and went into the studio to record an LP. According to the band members, they were rushed through the process and were not at all pleased with the final product. The self-titled album was finally released at the tail end of 1968 with very little promotion. To no one's surprise (including the band's), the record didn't sell well, but the group forged on, playing live around Cleveland and the eastern U.S. On March 2, 1968, they opened for Big Brother & The Holding Company at the Grande Ballroom in Detroit, MI. As a side note, the very popular Janis Joplin's Greatest Hits LP features an awesome live version of 'Down On Me' from that show.

Another year of continuous gigging came and went, and by the summer of 1969, the group had changed their name to Tank. This didn't last long however, and by the end of the year they decided to call it quits. In 1970, Leonard, Schuster and Murphy got back together with Duane Verh (guitar) and started a new band called Frigate.